Srinagar: Thousands of Muslims prayed in mosques across the Valley observing ‘Shab-e-Qadr’, the holiest night according to Muslim belief, seeking Allah’s blessings and pardon. 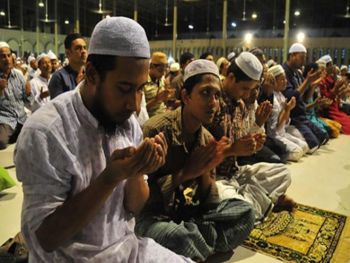 Many mosques had been tastefully decorated with electric illumination to welcome the devotees who started arriving with the evening prayers to observe ‘Shab-e-Qadr’ which falls on the 26th of the fasting month of Ramadan.

In summer capital Srinagar, thousands of devotees gathered at the Jamia Mosque in old city and the Hazratbal shrine on the banks of the Dal Lake.

People from many adjoining areas of the city also came to pray at the Jamia Mosque and the Hazratbal shrine where the devotees chanted ‘Durood’ (Praises of the Prophet) during the night creating a spiritual ambience that continued till dawn.

The management of the Jamia Mosque has recently installed a state of the art public address system costing millions of rupees.

“This public address system is similar to the one installed for the benefit of the devotees in Istanbul (Turkey),” said a member of the Mosque’s management committee.

With the newfound middle class prosperity, local Muslims have been contributing lavishly for the upkeep of the mosques in the Valley.

In Srinagar city, many mosques are now equipped with air conditioners.

Abdul Gani Mir, 51, said he has been coming to the Hazratbal shrine for ‘Shab-e-Qadr’ ever since he was a child.

“The solace one gets after spending the night in prayer and penance during Shab-e-Qadr is a privilege I would not miss for anything in this world.”