Shimla: The Himachal Pradesh unit of the Congress today accused BJP MP and state cricket body administrator Anurag Thakur for alleged wrong doings in the allotment of land to the sports body. 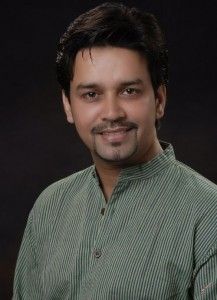 Accusing Thakur of allotting land to the cricket body for building a residential complex for players near Dharamsala’s picturesque stadium, the state Congress said in a statement: “The land given on lease to the Himachal Pradesh Cricket Association (HPCA) was for making grounds for playing cricket and not for commercial activities.”

Taking exception to Thakur’s statement, the ruling Congress said he had used his father’s (former chief minister Prem Kumar Dhumal) influence during the previous BJP regime to get village land for making a five-star hotel for cricketers.

The party’s assertions came after the Bharatiya Janata Party (BJP) leader justified the formation of a company for running the hotel.

“If the HPCA wanted to run a company then it should have purchased the land,” the statement said.

A cheating and misappropriation case was registered against the HPCA Aug 1 over alleged wrongdoings in allotment of land to the sports body, police said. The HPCA, however, said the case was politically motivated.

On July 26, Indian Administrative Service (IAS) officers Deepak Sanan and R.S. Gupta were charge-sheeted by the government for allegedly allowing a change in the land use of village community land for building the residential complex for players near HPCA’s cricket stadium in Dharamsala, 250 km from here.

The HPCA built the complex with 38 rooms, 32 huts and a gym just three km from the stadium.

Even the Communist Party of India-Marxist, citing a Supreme Court judgment of 2011 which held the transfer of village community land for private and commercial use as illegal, has also demanded that the HPCA should be evicted from the land.