Kangra (Himachal Pradesh): Traffic on the Pathankot-Jogindernagar narrow rail gauge line in Himachal Pradesh will remain off the tracks for at least 10 days due to landslides along the track, a railway official said yesterday. 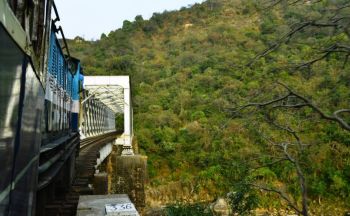 “Traffic was suspended Friday as heavy rain in region had damaged the track at a number of points between Guler and Kangra towns,” assistant divisional engineer (Northern Railways) M.K. Goel told.

He said the damage to the tracks was greater near Kangra.

The 165-km-long rail track from Pathankot in Punjab to Jogindernagar in Mandi district of Himachal Pradesh was once proposed to be declared a UNESCO heritage site.

Railway officials say trains have been playing normally between Pathankot and Guler in Kangra district; beyond Guler, traffic has been halted for repair work.

In March last year the rail traffic on this section was restored after seven months of closure.

At that time, the 84-year-old railway bridge on the Chakki rivulet had been damaged in flashfloods.

The bridge, initially constructed in 1928 when the Sanan hydel project in Jogindernagar was set up, is the only bridge connecting Pathankot and the picturesque Kangra Valley.

The British had laid the Pathankot-Jogindernagar line in 1932, linking the prominent religious towns of Kangra and Mandi districts of the hill state.

Each year, a large number of tourists ride trains on the line to take in the scenic beauty of the Himalayas.