Mumbai : Kingfisher Airlines, which continues to cancel many flights while struggling with an exodus of pilots and huge debts, Today reported a net loss of Rs.468.66 crore for the second quarter of the fiscal owing to higher fuel costs and low yields. 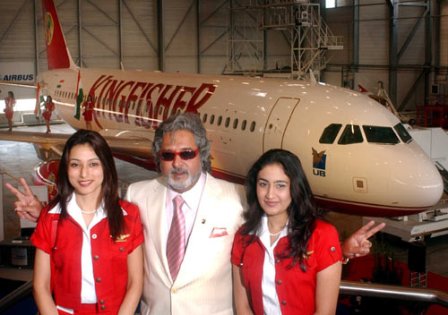 After Monday’s inconclusive meeting, the board will meet again Tuesday following talks between the carrier’s chief executive and chief financial officers and the company’s lenders here.

The company’s net loss stood at Rs. 230.81 crore in the corresponding period of last fiscal.

The airline, in a regulatory filing in the Bombay Stock Exchange (BSE), said: “The company has incurred substaintial losses and its net worth has been eroded.”

The results came in the backdrop of increasing anxieties about the financial health of the airline. The country’s stock markets, vendors and lenders would also be keeping a close watch on the company’s quarterly results.

The company’s scrip at the BSE grew by 0.70 percent at Rs.21.50 in the noon trade. On Monday, the scrip touched a high of Rs.21.65 before closing at Rs.21.35, up 8.63 percent for the day. Trading sentiments were buoyed after the news about the company’s board planning to cut costs and infuse capital.

The board meeting was expected to come out with a framework on cash infusion into the airline, as well as cutting some of the Rs.7,000 crore debt.

“It (board) will meet again today after the company’s chief executive and chief financial officers interact with the bankers,” a company official said.

Lenders said that they will hold a meeting with the airline, which they have asked to come up with more funds for them to consider restructuring of the company’s loans.

“We have asked them to come up with some fresh funds. Thing that is being discussed is selling some of the assets. If they do it, it is good,” Hemant Contractor, managing director, State Bank of India, told reporters on the sidelines of a World Economic Forum (WEF) event being held here.

Contractor added: “We (banks) have to be satisfied about viability of Kingfisher. There is no point in restructuring (debt), if the company’s operations are not going to be viable.”

The SBI leads the consortium of 13 banks which has lent to the airline. SBI is also the biggest lender to Kingfisher with loans of Rs.1,500 crore. Private lender ICICI Bank has also given loans of up to Rs.400 crore to the company.

The latest developments come after the airline has been curtailing 40 flights everyday since Nov 9 — a move taken to rationalise route plans and improve yields, the company said.

Currently, the airline also owes huge amounts to oil companies, the Airports Authority of India and private airport operators GVK and GMR groups. The airline has not posted any profit since its launch five years ago, and reported a net loss of Rs.1,027 crore last fiscal and Rs.263 crore in the last quarter.
IANS