Jammu: An indefinite curfew continued for the second day Saturday in communal tension-ridden Kishtwar town of Jammu region, as the district magistrate and police chief were removed in a nocturnal reshuffle by the Jammu and Kashmir government. 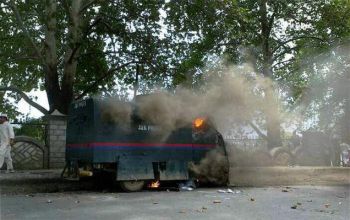 One person was killed and over 24 others injured in communal clashes in Kishtwar town yesterday, around 220 km from here, as unruly mobs fired at each other using 12 bore guns. The army was called out to stage a flag march and restore order.

The state government announced ex gratia relief of Rs.5 lakh in favour of the next of kin of the slain person, identified as Arvind Kumar.

More than 80 shops, a petrol pump, an oil tanker, some vehicles of the state police and the fire services department, in addition to government properties, were torched by mobs yesterday.

In the late-night reshuffle, Basheer Ahmad Khan has been posted as the district magistrate, and Sanjay Kotwal as the superintendent of police of Kishtwar.

Meanwhile, the Bharatiya Janata Party (BJP) and some other political parties have announced a shutdown in Jammu Saturday in protest against the clashes of yesterday.

The Jammu and Kashmir government has ordered a magisterial probe into the clashes. District Commissioner, Jammu, Shant Manu has been entrusted the probe, to be completed in three weeks.