Amritsar: A handful of activists of the Youth Congress briefly stopped the Delhi-Lahore bus near this Punjab city yesterday to protest the killing of five soldiers by the Pakistani Army in Jammu and Kashmir’s Poonch earlier this week. 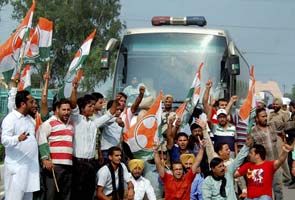 The protestors, led by Punjab Youth Congress president Vikram Chaudhary, stopped the ‘Sada-e-Sarhad’ friendship bus on the Amritsar-Attari road near here and shouted slogans against Pakistan.

The Youth Congress leaders showed black flags to the passengers sitting inside the bus. Security personnel escorting the bus immediately formed a cordon around the vehicle.

However, none of the protestors tried to damage the metallic golden coloured bus with India and Pakistan flags painted on it.

The bus, which moves with a pilot and escort vehicles on its journey from Delhi via Haryana and Punjab till Attari, was stopped for a few minutes before police reinforcements rushed to the spot and dispersed the protestors. The protestors were detained by the police.

The bus resumed its journey after the brief hold-up.

Chaudhary said that Youth Congress activists would stop the Delhi-Lahore and Lahore-Delhi bus at various places in Punjab from Saturday if the Pakistan government did not take action against those who killed Indian soldiers.

The bus services from Delhi and Lahore have been diverted from its route in the past two days due to protests at Phagwara town, 130 km from Chandigarh.

The protests erupted in Punjab after it was known that Pakistani troops ambushed the Indian soldiers inside Indian territory in a well-planned conspiracy.

The bus service was launched February 1999 by then Prime Minister Atal Bihari Vajpayee who travelled to Pakistan on it from Amritsar.

The bus service, which was continued even during the Kargil War of June 1999 between India and Pakistan, was stopped for some time after the Dec 13, 2001 attack on parliament by Pakistani terrorists.