Dehradun: With the rains continuing unabated and the Tehri Dam authorities being forced to release water lest it cause damage to the dam, the Ganga at Haridwar is just flowing at the danger level mark of 294 metres, because of which the district authorities have sounded a high alert and asked the people living in the lower areas along the banks to vacate their houses and move to safer areas. 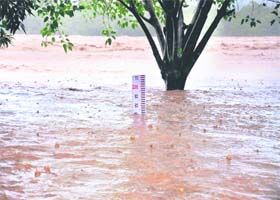 Haridwar district authorities confirmed that the high alert had been sounded and the people asked to move to safer grounds, as the met department had forecast that there was no let up from the rains. “The rains are to continue, the Tehri dam authorities claim that with the water levels rising in the reservoir, they are being forced to release water because of which the Ganga level is maintaining an upward trend and hence the high alert”, they added.

They said that the water level had touched the 293.50 metre mark late last evening and this morning the water was flowing at about the danger level mar. “Though the situation is being monitored closely and nothing being left to chance, but under the prevailing circumstances with the rains continuing and the Dam authorities having no option but to release water, the people living in the lower areas had been asked to evacuate and move to safer areas”, they confided.

Meanwhile reports from Lakshar sad that the flooding waters of the Ganga and Solani had entered about 14 low lying villagers and the crops had been submerged even as water had entered the houses. The villagers have been asked to move out and the situation reached a state where the flood waters reached National Highway-58, forcing it to close for about five hours as traffic came to a standstill on both sides.

However, claiming that the situation was under control and nets and stones were being put at the lower areas of the river to prevent the eater level from breaching the banks, authorities said that they were maintaining a close vigil. “We are adopting a wait and watch situation, even as the people have been asked to remain vigilant and the officers to keep a vigil over the situation to prevent any untoward incident”, they claimed.