Dehradun: Even as the National Green Tribunal has imposed a nationwide ban on mining from the rivers, illegal sand and stone lifting from the rivers and streams of Uttarakhand, including the Ganga at Haridwar, despite orders to the contrary by the apex court of the country, continues unabated courtesy the strong politician-bureaucrat-mafia nexus that is firmly in control in this small mountain state. 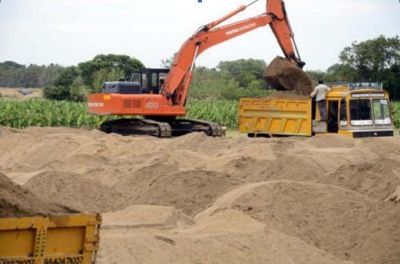 There is no day when the vernacular dailies do not carry photographs of tractor trailers loaded with sand, gravel and stones and even trucks parked in the river beds being filled by JCBs, but the district authorities have turned a Nelson’s eye to the goings on. Not that raids are not conducted, but the mafia is tipped off well in advance and on the day of the raid there is not a single truck, trailer, or even a bullock cart on the river or stream beds.

Despite the fact that some of the streams and rivers are in spate, but this has not deterred the mafia from continuing their illegal activities in the areas where the water levels are low even as the authorities look the other way. In fact, if reports are to be believed, the operations start at dusk and continue well into the early hours of morning, while at other far off places, the trucks can be seen being filled all through the day.

What can be more appalling than the fact that a senior police official admitting that sand and stone is being illegally mined from the river said that the police force is almost helpless in the matter. Whenever it is decided to organize a raid and seize the trucks involved in the illegal mining, the mafia is given information well in advance and the raids prove to be futile for not a single catch is made and it is hard to say who the black sheep is that informs them, said the official.

So string is the nexus that the illegal mining is not only going on in the river beds within the city limits, but even in the Rajaji National Park area and other places right under the nose of the revenue and forest authorities. How come the police, revenue and forest department authorities cannot see what is happening in their immediate vicinity id anybody’s guess, but the fact remains that despite even the senior officers knowing about the illicit activity, is continuing unabated.

A senior official on conditions of anonymity said that the ban on mining from the rivers and streams of the state is in force and it cannot be done without permission, but even then it is happening. “On a rough estimate the activity in Dehra Dun district alone involves about Rs three to five crores every month and the state is losing precious money, but such high is the money involved that the practice continues unabated in open knowledge of all”, he added.

Admitting that it could not happen without the active involvement of the official of the concerned departments, he said that there is no river or stream in Uttarakhand which is not being illegally mined from and there is no district where the mafia is not actively involved. But then there has to be a political will to take action against those involved and there seems to be no political will to take action against them at least ever since Uttarakhand came into being, he admitted.

The official claimed that it is not only the fact that the state is losing valuable revenue, but the mining is being done in an unscientific manner and there are deep pits made on the river and stream beds, which turn into death traps in the rains when water flows is those river beds. A person crossing the river is suddenly caught unawares and falls into the pit made by the sand diggers and is swept downstream to lose his life, he pointed out.