Mumbai: In a horrific peace time military disaster, a newly refurbished Indian submarine sank with 18 sailors at a naval dockyard here early Wednesday after a huge explosion engulfed it in flames.

Three officers are believed to be among the 18 men who met a tragic watery grave after a deafening blast tore through INS Sindhurakshak, which was berthed in the naval dockyard off Mumbai Harbour, offcials said. 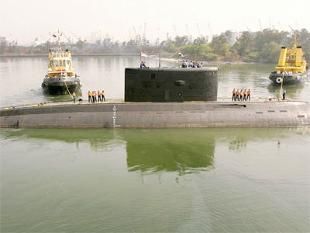 The cause of the roaring explosion, heard over a two kilometre radius including large parts of south Mumbai, and the blaze that gutted the deep sea fighter vessel is still not known.

The sailors were reportedly working inside the submarine at the time of the incident and remained trapped till the submarine began sinking and finally went down around dawn.

TV grabs of the incident and amateur video shots showed a huge ball of flame erupting on the horizon of the Mumbai harbour and lasting for nearly three hours before it was brought under control around 3 a.m.

An alert Mumbai Fire Brigade managed to save a second submarine.

Realising the danger, Rahandale alerted his fire figthers and those from the Indian Navy and Mumbai Port Trust to save that submarine.

“We built a wall of water-jets between INS Sindhurakshak and the other vessel, thereby giving it a safe window to sail to safety,” he said.

In his first reaction, a grim Defence Minister A.K. Antony told the media in New Delhi: “I feel sad about those navy personnel who lost their lives for the country.” He did not give the number of dead.

Antony then flew to Mumbai and visited the site.

The naval docks, the Mumbai Port Trust and the Jawaharlal Nehru Port Trust share a common navigation channel in Mumbai harbour through which the vessels belonging to all the three sail in and out.

An inquiry has been ordered into the disaster on the eve of India’s 67th Independence Day.

INS Sindhurakshak was a diesel-electric submarine that returned home last year after a major refit at Russia’s Zvezdochka shipyard.

The incident has dealt a major blow to Indian Navy, which has grown tremendously in recent decades with a view to dominate the Indian Ocean region by acquiring blue water operational capability.

INS Sindhurakshak was laid down in one of Russia’s oldest shipyards, the Admiralty Wherf yard in St. Petersburg, in 1995. It was launched in 1997 and delivered to India in December that year.

The contract for its refit and modernization was signed in June 2010.

Part of the refit involved installation of equipment for Klub-S (3M54E1 anti-ship and 3M14E land attack) cruise missiles and over 10 Indian and foreign-made systems, including the Ushus hydro-acoustic (sonar) system and CSS-MK-2 radio communications system.

In addition, the boat’s cooling system was modified, a “Porpoise” radio-locater fitted and other work carried out to increase the boat’s military capacity and safety.