Dehradun: Even as there are indicators that the Nanda Devi Rajjat yatra scheduled later this month could be called off due to the damage and destruction on the 280 kms route that it takes, the Posts and Telegraphs department will be taking out a stamp, first day cover and cancellation of the yatra from August 20. 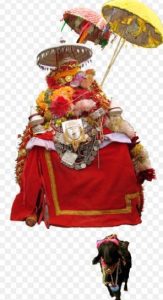 The yatra, which was to be held after a gap of 13 years and led by a four-horn ram, that was born earlier some time back in the region, was supposed to revive pilgrimage in the region. It was also supposed to restore the confidence of the people into coming to this small mountain state, which had been badly hit following the June 16-17 tragedy.

Sources in the Posts and Telegraphs department here said that a special cancellation had been specially made to mark the yatra this year and postal stamps and first day covers had also been designed. While the postal stamps will be issued from Monday onwards, the first day covers will be available after August 20, they claimed.

They said that the design of the special cancellation had been done by Abhay Mishra and Rajesh Verma and Rajya Sabha member from Uttarakhand, Tarun Vijay had taken special interest in getting the P & T department to issue the stamp, first day cover and special cancellation. He has thanked the department for doing the same and doing a special favour to the people of this small mountain state.