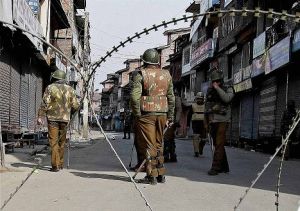 The home secretary will also take stock of the situation on the international border.

District Magistrate of Kishtwar Basheer Ahmad Khan told that curfew was relaxed for a while yesterday during Independence Day celebrations, but later re-imposed.

Curfew was imposed following large-scale communal violence Aug 9, in which three people were killed. Private and public properties worth millions of rupees were destroyed by rioting mobs.

Curfew was Thursday lifted from all the other seven districts of Jammu region — Jammu, Kathua, Samba, Reasi, Udhampur, Doda and Rajouri — where it was imposed Aug 10 as a precautionary measure.

Authorities have decided that educational institutions in Jammu and other districts would re-open Monday.

Union Home Secretary Anil Goswami arrived early today in Jammu along with a team of officials.

The home secretary went straight to R.S. Pura in Jammu district to get a first-hand experience of the situation on the international border (IB).

He is set to visit the headquarters of the Border Security Force (BSF) in Paloura in Jammu today to interact with senior officials about the ground realities.

The home secretary will review the law and order situation in Jammu region at a high-level meeting of state and central government officials in winter capital Jammu.

The international border in Jammu and Kashmir is guarded by the BSF, while the Line of Control (LoC) is manned by the army.

Tensions have been running high on the international border and the LoC following repeated violations of the November 2003 ceasefire by the Pakistan Army.