BA Pass, a fantastically directed film travails a young boy journey, who enters the world of prostitution — ‘just by chance.’

Based on the short story, ‘The Railway Aunty’ by Mohan Sikka, BA Pass is a thought provoking drama directed and produced by Ajay Bahl.

The 95 minute saga is a sure-shot feast for someone who wants to stretch the hangover of the last week’s critically acclaimed release, The Ship of Thesus a bit longer.

A movie that begins as another erotica shapes up into a deeply crafted and penetrative cinema that will leave you dumbstruck at the end. 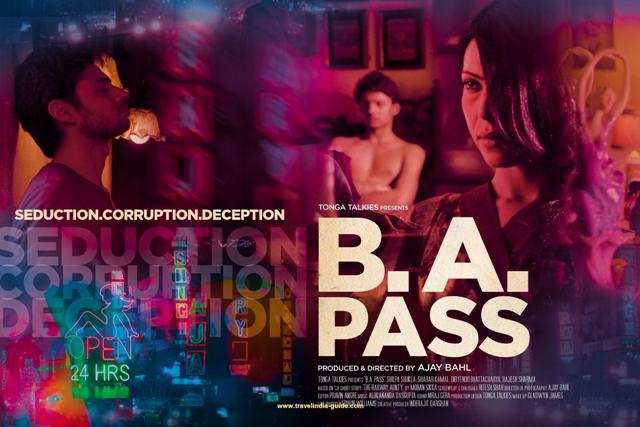 The flick is a hardnosed and undulated tale of a young orphan who struggles for his existence and resorts to selling his pride to some Delhi elite class women. It exposes the pungent and boorish truth behind the lives of blameless poor in the metros cities. The flick covers the inhumane aspect of life in big cities in a way that no one has ever tried.

Once again, Delhi is back in the backdrop and is extensively shot for various locations of Paharganj, Sarai Rohilla and Barakhamba Road.

It is a narrative of Mukesh (Shadab Kamal) whose life undertakes various blind turns to come out of a reprehensible existence. The saga explores in facet, the options Delhi proffers to young gigolo and the alternatives he is confronted with.

Mukesh is an orphan who moves to Delhi to live with his aunt and complete his graduation (BA). He wishes to land up into a job and take responsibility of his younger sisters who are forced to live in an orphanage.

But, chess and novels of Russian chess grandmaster Gary Kasparov interests him more and also proves to be a reason for him to befriend Johnny (Dibyendru Bhattacharya) who shares the same passion too.

One day, Mukesh lands up into the house of married aunty Sarika (Shilpa Shukla) who seduces him for sex at the very first meet. More he acquaints himself with the counters of her body the better he learns the secrets of love-making. The film leaves no scope for imagination and nor do Shilpa and Shadab.

Movie takes a brutal turn suddenly and innocence begins to be weighed in terms of money by the lady. The adultery transforms the lady into a pimp who settles clients for her guy. The innocent guy turns into a gigolo pleasing all the high profile women of posh Delhi for some fast cash. What follows is a series of charitable and licentious sex tales, where the male remains centre stage but the females (aunties) around keep shifting. The relationship based on yearns, lies, betrayal and treachery gives rise to plenty of drama.

The scene where Mukesh bargains his pride for some easy bucks with few violent drunken men after being duped by almost everyone in the city is the most defining moment of the story.

Shadab was energetic and completely gullible in the portrayal of his role. Shilpa was both seductive and wicked at the same time. This will be her defining moment post Chak de for her bold role of a lusty auntyji who loves consuming young gullible guys.

It was refreshing to see Deepti Naval, a popular parallel cinema actress of yesteryear in a cameo, though scenes involving her seemed purposeless and forcefully incorporated.
The flick is contrary to regular moral ground boasted by Bollywood and reflects French story telling style in every bit.BA Pass has already been showered with critical acclaims worldwide.

But, the movie fails to involve the title of the movie (BA Pass) in any logical way. The way Mukesh call his sisters over his phone at the end when his SIM card was already thrown away into trash by Johnny seems baffling.

Nevertheless, the movie is rich on subject and variety. The next time you happen to be standing in the dark bylanes of Paharganj in Delhi, your eyes will surely search for Mukesh in the crowd. The movie is a must watch but the physically intimate scenes can produce awkward moments for a typical Indian movie-goer!

**The movie gets 4stars on the scale of 5 from Hillpost.