Chandigarh: The Congress party may claim to identify itself with the “aam aadmi” (common man) but some of its leaders seem to have taken this rather too seriously. After a young Congress legislator barged into the ‘Sangat Darshan’ (community meeting) of Punjab Chief Minister Parkash Singh Badal as a common citizen, the Congress asked its other local leaders and legislators to follow suit. 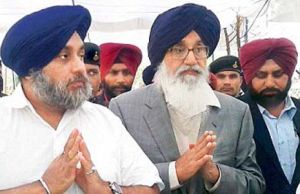 Badal, who claims to be “reaching out” to the people by regularly going to meet them at Sangat Darshans in villages and towns across Punjab, was surprised to find young Congress legislator from Gidderbaha Amarinder Singh Raja Warring among those who had come to see him in a village in the constituency.

What followed was a show of one-upmanship by the Congress legislator, who wanted to get maximum footage from the event and leave Badal embarrassed and the chief minister unrelenting to give the young lawmaker any political mileage.

While Warring’s idea could be an original one, the Congress, which is desperately looking for issues against Punjab’s Akali Dal government after successive losses in all types of elections, quickly tried to cash in on it. It asked other legislators and leaders to confront, and possibly embarrass, Badal at all his Sangat Darshans.

However, at the very next event, as Congress legislator from Muktsar Karan Kaur Brar entered Badal’s meet, the elderly leader not only gave her due respect but also listened to all issues raised by her about her constituency. The political damage that the Congress wanted to cause Badal was controlled.

This led to a war of words between Akali Dal and Congress leaders.

Badal said that his programme of going to meet the people at their doorsteps through the Sangat Darshans will continue as this was the core element in his vision of democracy.

“The people are my masters and I am their servant. A servant always goes to his master and I always go to the people. This relationship will go on like this as long as I am alive. Plus, when I sit with the people, I feel elevated,” Badal said, adding that Congress leaders “consider it below their dignity to go to people”.

The Congress in Punjab has neither been able to find a charismatic leader after Amarinder Singh was removed in March as the state Congress chief in the aftermath of the party’s disastrous showing in various elections nor been able to find any worthwhile issue to corner the Badal government with. A few small political gimmicks are all that the highly-factionalised Congress leadership has managed to perform in the last few months. At times, the Congress has ended up with egg on its face.