Dehradun: A month has passed since Uttarakhand was swamped by the rain-flood tragedy, and hundreds of bodies and animal carcasses still lie buried under several feet of silt and rubble in the Kedarnath Valley. The authorities will now deploy machines to dig out these remnants. 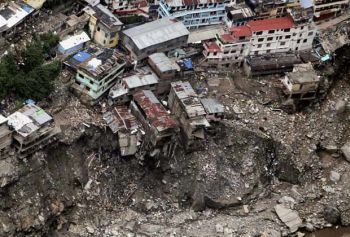 State Health Minister Surinder Singh Negi told that the state government will use special machines to dig out the bodies buried deep in the debris in the flood-affected areas of the state.

“The machines have already been air-dropped in the Munsiyari area Sunday and will soon be dropped in the Kedar Valley as well,” he said. Munsiyari is over 100 km from Kedarnath.

Negi said they have removed almost all the bodies which were lying strewn around on the surface in the aftermath of the floods, but the bodies buried in the silt are difficult to be removed.

“Since it is impossible to dig out all the bodies manually, we are using machines,” he said, adding that two machines are being sent to the Kedar Valley.

Negi said inclement weather and a damaged helipad have hindered and delayed the process of airlifting the machines earlier.

“The issue we are facing in Kedarnath is bad weather. One other factor is the helipad is badly damaged and not equipped for landings as of now,” the minister said.

To prevent the putrefying bodies from causing infection and spreading disease, the authorities have scattered tonnes of bleaching power in the flood-hit areas and also sprayed disinfectants, including from helicopters.

“We have also provided lakhs of fluoride tablets to people to make their drinking water safe,” he said.

Negi said there have been no health issues in the affected areas so far.

“We have made efforts to ensure that there are no outbreaks of diseases,” he said, adding that a team of 80 doctors from the central government is camping in the state.

The state government Monday declared 5,748 people are still missing, and that it would start disbursing compensation to the next of kin. But the government clarified that search for the missing would continue.