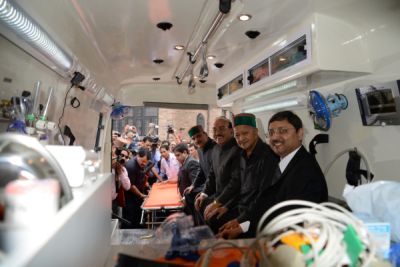 The new ambulances, associated with the ‘108’ National Ambulance Service launched by the state government in December 2010, would be deployed across the state, Health Minister Kaul Singh told.

He said preference to deploy the ambulances would be given to the villages located in the interiors of Chamba, Kinnaur, Lahaul and Spiti, Shimla and Kangra districts.

To run the round-the-clock free ambulance service, the state has tied up with GVK-EMRI (Emergency Management Research Institute), a Hyderabad-based company, under a public-private partnership mode.

All the 162 ambulances are furnished with life-saving equipment like automatic external defibrillator and drugs like anti-snake venom.

An ambulance takes 25 minutes to reach a person in urban areas and 35 minutes in rural areas.

Officials said the National Ambulance Service, earlier known as ‘108’ Atal Swasthya Sewa, has so far attended over 300,000 emergency calls, including around 225,000 medical emergencies.

Of the total service provided, 88 percent is in rural areas.