Srinagar: A shutdown called by the separatists and selective restrictions by the authorities marked Martyrs’ Day in Srinagar Saturday, as floral tributes were paid to those who laid down their lives in 1931 protesting autocracy. 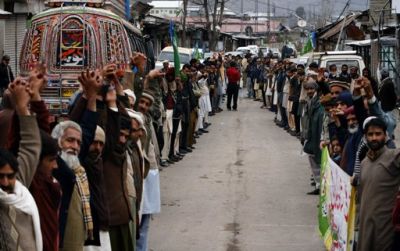 Though officially these restrictions were termed “preventive measures”, the restrictions halted life in areas where they were imposed.

On July 13, 1931, a large crowd gathered outside the central jail where Abdul Qadeer, a Pathan butler who had raised his voice against the autocratic rule of the Dogra Maharaja, was being tried in-camera.

As the crowd stormed the jail, guards opened indiscriminate fire, killing 28 people. Those killed in the central jail firing are known as the martyrs of 1931.

Separatist leaders called for a general shutdown today (Saturday) because of which markets, public transport and other businesses remained closed in the city.

Government offices, educational institutions, banks and post offices are, however, closed as the Martyr’s Day is also observed as a public holiday.

Senior separatist leaders Syed Ali Geelani, Mirwaiz Umer Farooq, Muhammad Yasin Malik and others have been placed under house arrest by the authorities to prevent their participation in separatist protests.

Spontaneous stone-pelting incidents occurred yesterday evening at Nowhatta area of the old city, where young people engaged security forces in clashes till late in the night.

The protests were held against the house arrest of Mirwaiz Umer Farooq who could not deliver the Friday sermon at Jamia mosque in old city.

The day was especially important as the first Friday of the Holy Muslim month of Ramadan, which started here on Thursday.