Chandigarh: It may not reflect on their individual CVs but top Congress leaders in Haryana have been competing to claim credit for the recent inclusion of two more districts of the state in the National Capital Region (NCR). Now, almost half of Haryana is in the NCR. 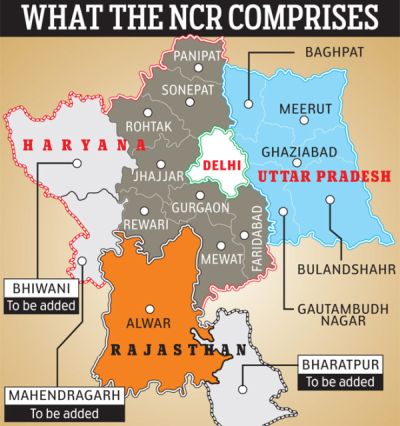 With quite a few people claiming credit for the “achievement”, Haryana Chief Minister Bhupinder Singh Hooda had to step in and say the credit should be given to all ministers and members of parliament for the inclusion of Bhiwani and Mahendergarh districts in the NCR.

However, when told that Chief Parliamentary Secretary Rao Dan Singh, MP Shruti Choudhry and ministers in his cabinet – Kiran Chaudhary, Rao Narender Singh and Satpal Sangwan – were all staking claim for making the inclusion possible, Hooda showed papers to prove that all of them, as also the state government, had written to the NCR Planning Board (NCRPB).

Hooda claimed that he himself had made a proposal in this regard at an NCRPB meeting. The ministers had made similar requests in writing, he said.

“This would generate new dimensions of development in these districts. It had also been decided at the NCRPB meeting that Jind and Karnal districts would also be included in the NCR,” Hooda said.

But the biggest claim for credit on this issue came from Public Health Engineering Minister Kiran Choudhry and her daughter and MP Shruti Choudhry, who represents the Bhiwani-Mahendergarh parliamentary constituency in the Lok Sabha.

Both expressed their “gratitude to the UPA chairperson Sonia Gandhi, Congress vice president Rahul Gandhi and (then) Urban Development Minister Kamal Nath for accepting their demand” to include district Bhiwani and Mahendergarh in the NCR.

Describing the decision as “historic”, both said that this would bring the two districts “at par with other parts of the state”. In other words, this meant that the Hooda government neglected these parts in terms of development.

Kiran Choudhry said that her daughter “had worked hard and continuously raised her voice to get these areas included in the NCR. She had time and again met Sonia Gandhi and Kamal Nath for an early decision on the issue”.

“So far, there is no significant development in these 10 assembly constituencies. But now it is expected that people of Bhiwani district would be benefited with global development on the pattern of Gurgaon and Sonipat districts,” Kiran Choudhry added.

The Hooda government has been drawing flak in recent months, especially from Congress leaders, for “discrimination” against south Haryana in terms of development at the cost of Hooda’s home district Rohtak.

The chief minister himself acknowledged that with the inclusion of the two districts in NCR, there would be faster development in south Haryana and it “would no more remain backward”.

Some ministers and legislators, who are considered close to Hooda, have been thanking him and his MP son, Deepinder Hooda, for this recent development.

Gurgaon, Faridabad, Rohtak and Sonipat districts are already covered under the NCR – the territory surrounding the national capital Delhi. Parts of Uttar Pradesh, like Noida and Ghaziabad, also fall in the NCR.

The NCRPB provides financial assistance to developers in the NCR area in the form of soft loans to the extent of 75 percent of the project cost. The board provided loan assistance to 277 infrastructure projects worth Rs.18,994 crore up to March.

In the Haryana sub-region, 106 projects have already been completed at an estimated cost of Rs.4,683 crore.

Currenetly, there are 76 ongoing projects with NCRPB funding in Haryana at an estimated cost of Rs.9,238 crore.

Gurgaon has grown at a phenomenal rate of 293 percent in the last decade, the highest in the NCR.