For a glass of milk he ran like a champion. Puzzling it may sound but reality it is. An athlete who divorced leisure and pleasure to win ‘wins’ for his nation, such was our ‘Flying Sikh’ , a  nickname coined by none other than General Ayub Khan of Pakistan, after he saw him flying like a bird in the sky; all fearless, plucky and intrepid but determined to cross the last mile. 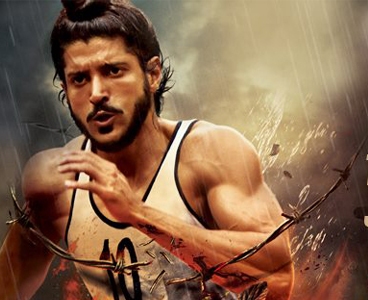 He ran and ran triumphant throughout his career (barring the Olympics) a journey that commenced as a willowy Sikh recruit in the Indian army, who loved to boogie around and sprint. He ran bare-footed, worn out to materialize as a sports icon, whose single leap gave palpitations to innumerable folks in the country.

The biopic of the greatest Indian runner ever; Bhaag Milkha Bhaag revolves on emotional angles and overly dramatic scenes. The theme runs on the corresponding lines to Rang De Basanti (another blockbuster from the director Rakesh Om Prakash Mehra). Few of the creative liberties have been over-knitted and the picture is more of a mirrored-version of RDB at times; especially when the story flashbacks to the childhood days of Milkha.

A script that took Prasoon Joshi around 2 years to finalize, deserved more matter and few ‘less’ (scenes). Literally so! The movie is more than 3 hours – but not a ‘pakau’ for sure.

The picture traces childhood of the champion runner in detail including the excruciating Indo-Pak partition, and his involvement in crimes of paltry nature. He falls in love with a girl (Sonam Kapoor as Nirmal Kaur) and the romance transforms this Sikh youth completely who finds new meaning to his life. But, only to lose it later.

He joins the Indian Army and takes the big leap in his life to break records and make some new ones, ably guided by his mentor/coach Parvin Malhotra who is wide-ranging in his role.

Yograj Singh (father of cricketer Yuvraj Singh) gets to play an inning in Bollywood and justifies his burly presence on the screen. Prakash Raj for a change is not a ‘Madrasi goonda’ in the flick and plays a stringent army platoon trainer. The famous sidekick of villain in 90’s, Dalip Tahil is Jawaharlal Nehru; a side-splittingly drafted characters.

Divya Dutta is brilliant as always in her typical Punjabi role, with perfect dialect and acting skills. Alas! She is wasting herself with such insignificant performances. Farhan is a total ‘Punjab-da-Putar’ and lives up to expectations both in looks and character. No one could have been as strikingly similar to the great man and his six-packs completely justify the portrayal of a sportsman.

Cinematography is the second laudable protagonist in the movie and therefore, kudos to Binod Pradhan. The lyrics are deep especially the “Zinda” song but not the deepest as we associate with Prasoon Joshi. Rakesh Mehra tries to over-intensify the movie at places. Some scenes are forcefully integrated and could have been parted with.

The music by Shankar Ehsaan Loy is fine. The track ‘Zinda’ really injects an exciting wave in audience. Pakistani singer Meesha Shafi gets to play Perizad, the female swimmer, while renowned playback singer Arif Lohar lends his voice to a track.

It would have been better had more races of the great sprinter found the screen space, than unrequired love scenes (and songs) especially the ‘Melbourne episode’. The movie falls short to make solemn impression as a sport based flick. Taken as a whole, the movie is an epic composed of a loosely bonded series of tales.

Although, most don’t have a taste for biopics now days, we can pay tribute to the great sprinter through one-time watch. So, sprint to your nearest theatres at least for Milkha Singh, if not for the movie.

The movie gets 3 stars on the scale of 5 from Hillpost.