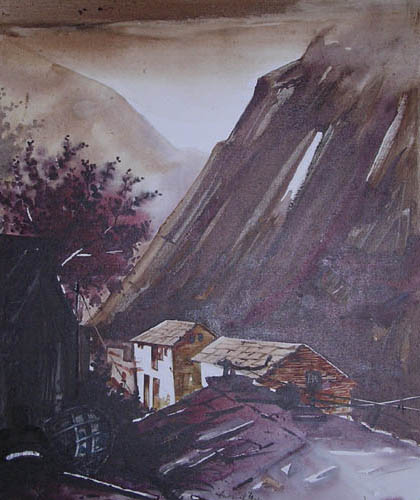 The damage caused by a cloudburst and the consequent devastation due to unprecedented flooding continues to unfold in the state of Uttarakhand. In response to the colossal tragedy, there have been much animated discussions on the relationship(s) between the environment, development and planning. However, the voices and concerns of the inhabitants of the region, most of whom have experienced such events before, have been subdued in the crossfire of ‘breaking news’ and the varied hypotheses about the calamity.

As Uttarakhand continues to confront the loss of life, livelihoods and resources, primarily in the Garhwal region, people in the adjacent Kumaon region, while expressing their sorrow and solidarity, are also fraught with the anxiety of a shared fate.

The state of Uttarakhand is administratively divided into thirteen districts, and culturally into two regions – Garhwal (in the west, sharing border with the state of Himachal Pradesh) and Kumaon (in the east, sharing border with Nepal). The ‘Char Dham’ are located within Garhwal, which happens to have borne the brunt of the flooding since June 16, 2013. The floods caused maximum damage in the areas of Kedarnath, Rambada and Gaurikund in Rudraprayag district, Joshimath and Pandukeshwar in Chamoli district, all of which are in the Garhwal region of the state, which comprises of seven districts in total.

One of the most severe natural disasters to have hit India, the death toll remains undetermined and nearly 6,000 missing people have been declared dead. The Kumaon region has not witnessed such severe and large scale flooding this year, with the exception of the Pindari trek area in the Kapkote block in Bageshwar district and in the areas round the Kali river, bordering Nepal in the district of Pithoragarh. The other four districts, which constitute the area known as Kumaon are Nainital, Champawat, Almora and Udham Singh Nagar.

While one registers the anxiety and fear of a similar calamity in their own region among the Kumaon residents, they also possess a long held familiarity with the nature of such calamities. For example, most people do not consider this year’s tragedy to be a freak event; many of them remind one of the earthquake in Uttarakashi in 1991, memories of which still linger vividly.

As M.C. Pande, a retired schoolteacher in Almora who has been living there for over five decades said, “This happens every year, may be not on the same scale as this year. But ‘daiviya aapadas’ (natural calamities) are a constant feature of life in the mountains. The fact that there were so many tourists from all over the country while tragedy struck has made this a national tragedy and unfortunately so. However, those of us who have lived here for so many years see landslides, flooding and cloudbursts occur yearly but it does not garner anybody’s attention.”

Lalit Pande, director of the Uttarakhand Seva Nidhi Paryavaran Shiksha Sansthan in Almora, noted that such events are occurring at a greater frequency over the last few decades even though they have been of regular occurrence in general. For example, villages in the Ukhimath and Jakholi block suffered from a cloudburst even last year (2012), leading to a loss of an estimated 58 lives; more than 300 families were affected and the villagers are yet to be rehabilitated.

The estimate of loss of lives due to natural calamity during 2010-11 stands at 46 for the district of Almora including over 4000 affected households. Almora and its surrounding areas were hit by a cloudburst in 2010 leading to swelling of the waters of the Kosi and landslides, causing an estimated 60 casualties in total, 28 in Almora alone; it also incurred heavy damage to the Khairna-Almora road. In 1998, a landslide in the village of Malpa in the Pithoragarh district claimed over 250 lives including pilgrims on their way to Kailash Mansarovar.

Therefore, according to Pande, there is a need to go beyond romanticising the ‘pristine’ Himalayas and bringing the concerns of the people to the centrestage while discussing not only this tragedy but others that have occurred in the recent past as well.

While speaking to people in Almora and nearby villages in the Danya area, one captures a sense of remorse at the near empty villages, at the loss of the community spirit of conservation and of local knowledge. While on the one hand, most able-bodied working age men have left the villages to seek work outside the state or in the Terai region within the state, small hill towns are swamped with newly constructed buildings.

Ghanshyam Pande, owner and manager at the Khali estate, Binsar explained in detail how new construction activity was not at all guided by older principles, for example, the rampant use of cement instead of the traditionally used mud, building narrow walls instead of the traditionally built thicker and wider walls, encroachment of new construction up to the roads leaving little or no space for the down-flow of rainwater. Such an expression is not merely an articulation of contradictions due to changes in society in general or that of nostalgia, they assume greater significance in fragile ecologies like that of this area.

Uttarakhand was demarcated as a separate state in order to address the issues specific and unique to the hill state, one of which was that of environment and development. However, a little over a decade after its formation, many of the residents, especially those in the non-Terai area, complain that their concerns about life and livelihood in the hills have been neglected by the government. For example, there is a sense that there is disproportionate attention on the rescue efforts in favour of the tourists and visitors and not on those who are permanent inhabitants of the area.

Like Renu Juyal at the Uttarakahand Environment Eduction Centre explained, “the villagers in the affected areas cannot go anywhere else and seek livelihoods, what is the government’s thinking about that?”

For those who suffer the ravages of natural calamities almost annually, it is saddening that at even the time of such a tragedy, they seem to be the government’s last priority, their concerns still unheeded.

Up in Jageshwar, among a group of ancient temples from the 8th century AD, the sturdy shrine in stone of Lord Kedarnath still stands tall, but the offerings are few. The popularity index of the deities and the devotees they attract remains unpredictable but for the local residents this is their only home. The Uttarakhand government should undertake a holistic review of long-term reconstruction and rehabilitation, incorporating the local concerns, knowledge and experience of the resident population, in the absence of which it shall be yet another hollow assurance.

Bhoomika Joshi did her Masters from Oxford, UK and works on development and gender related issues. The views expressed are personal.