Dehradun: Uttarakhand vidhan sabha speaker, Govind Singh Kunjwal, who is known to do plain speaking even at the cost of embarrassing his party government, minced no words when he said that a lot left to be desired in the rescue and relief operations being undertaken and that the food and other essentials were not reaching the needy. 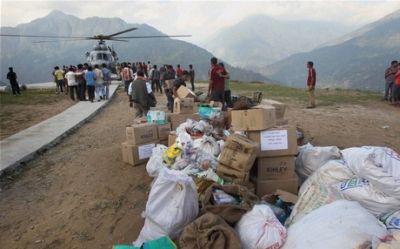 Admitting that it was the tragedy of tragedies that had hit this small mountain state on June 16, he said that the state government and its officers should have risen to the occasion, but sadly they did not. And even after more than 20 days after the tragedy, it was sad that there were people in the far flung interiors who had yet to receive much needed relief.

“The tragedy is that the officers are painting a rosy picture of the relief work that is going on and that every tragedy hit region of the state is being provided relief and succor. But sadly this is not happening and the chief minister, rather than going into the truth of the claims is taking their word for granted, which is creating further problems”, he added.

Urging all legislators to cut across party lines in this crucial hour and feed the chief minister the correct picture as it is at the ground level of the relief operations and requirements of the people in their areas, he said that it was only they who could provide the real picture of the situation to the chief minister.

It is neither to undermine the chief minister, nor the relief operations that are being undertaken, as such a tragedy of mammoth proportions needs a Herculean effort to cater to all the areas that have been hit, but at least the real picture should be presented to the chief minister so that he can take the necessary steps to improve the shortcomings”, he pointed out.

There is no denying that Kunjwal is speaking from his heart and is really disturbed at the fact that large areas in the interiors of this small mountain state have remained untouched by relief operations, though on paper the picture is rosy. There are villages where entire ration have finished after catering to the needs of the stranded pilgrims and now the villagers are without food.

This is perhaps why residents of about 35 villagers have been holding four officials as hostages at Bhatwari in Uttarkashi district of the state for nearly the last 24 houirs and have refused to release them. The district authorities have rushed senior officials to pacify the villagers and discuss their requirements so that the officers can be rescued.

The villagers have alleged that for the last 23 days no efforts have been made to open the link road to their villages and no supply of food and other essential commodities have been made to their villages. On learning that ration and other commodities were being distributed at the forest rest house, the reached their in a crowd and held the district development officer, tourism officer, ranger and district supply officer who were overseeing the distribution of relief material, as hostages.

This may be one isolated incident, but if reports reaching from various parts of the state are any indicators, there is resentment brewing in various parts on the lack of relief operations and no ration and other essential commodities being supplied to the villages in the interiors, which could lead to Bhatwari type episodes at other places also and officials be held hostages.

Villagers in the core of the tragedy hot areas said that roads had been badly damaged, which were no doubt hampering the smooth flow of ration to their region, but choppers could be used to air drop food at these places. Further they were of the view that if NGOs could fight against the odds and reach these places with ration and other essentials, why not a better equipped state government team.

Meanwhile, in what has come as a great relief to the state government, it could manage to rescue 55 members of a special team that had been sent to Kedarnath for undertaking the cremation of the bodies that are said to be lying there after collecting the DNA samples. However, the rescue operations had to be abandoned later because of inclement weather and the remaining 25 members of the team continue to be stranded there.