New Delhi: Contrary to popular wisdom in India, a new book on Ravana, the ‘demon king’ in the Ramayana epic, says he ruled a rich and vast kingdom in ancient Sri Lanka, wrote books and built a maze of underground tunnels to protect his empire. 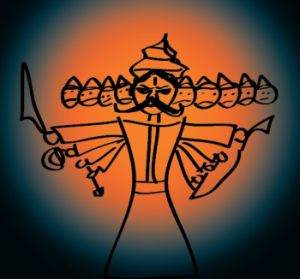 According to “Ravana, King of Lanka” (Vijitha Yapa Publications), Ravana may not have lost the war to Lord Rama but for the “betrayal” by his wife Mandodari and half brother Vibhishana “who gave away war secrets to the enemies”. The 174-page book on Ramayana’s villain is based on extensive research by a Sri Lankan, Mirando Obeysekere, based on archaeological evidence as well as palm leaf writings from a bygone era.

According to the book, published in Sri Lanka, the Ravana kingdom was spread over a vast region that included today’s Nuwara Eliya, Badulla, Polonnaruwa, Anuradhapura, Kandy, Monaragula, Matale and Chilaw.

Ravana himself is said to have lived in Sigiriya, now a Unesco heritage site about 170 km from Colombo. He was a member of “a highly advanced and intelligent” Yaksha tribe.

It was due to Ravana’s influence that some places in Sri Lanka were named after him: Ravana Ella and Ravana Cave in Badulla district, Ravana Kotte in Trincomalee and Ravana Kanda in Ratnapura. Ruhuna, another place in Sri Lanka, was earlier called Ravana Desh, the book says.

Two villages in the Kandyan region carry his name: Uduravana and Yatiravana. It says ruins of the Ravana era are spread over villages in Haputale, Badulla, Bandarawela, Welimada, Uva, Pasara, Soranatota, Viyaluwa and Mahiyangana “unharmed, giving an added impetus to Ravana history”.

Ravana reportedly built a temple in honour of his parents in Anuradhapura, to the north of Colombo. The Portuguese allegedly destroyed this temple.

The book admits that Ravana’s abduction of Sita, Rama’s wife, led to his undoing and his kingdom’s decay. It also speaks glowingly of Rama.

“Rama was an honest unassuming person,” it says. “Rama did not possess aircraft nor did he have unlimited wealth like Ravana. He did not have people of 10 countries under him. His main motto was ‘Truth will win’.”

But it portrays Ravana in a grander manner.

“King Ravana was an expert among warriors; a specialist among medical men; a Rishi among astrologers; a superior statesman among rulers; a maestro among musicians.”

Describing Ravana as an adherent of Buddhism, the book says one of his works was “Agni Tantra”, on how to walk on fire, and another on children’s diseases.

Among the book’s other claims, some sensational:

– The Ravana flag can be considered the earliest flag of Sri Lanka.

– The architecture in the Ravana kingdom was “magnificent” and houses were built on costly timber; this is why Hanuman easily set fire to them.

– Ravana did not die in the Ramayana battle but only lost consciousness after being hit by a poisoned arrow.

– Ravana was an artist of the highest order.

– Ravana’s soldiers were the first in the world to wear camouflaged headgear in battlefield.

– Many oriental musical instruments were designed according to Ravana’s creations.

– The Yakshas of Ravana era had chemicals that could soften rocks like loaves of bread. This is how they bore through huge rocks to create underground tunnels and pathways.

– Live burial of criminals was done during Ravana’s rule.