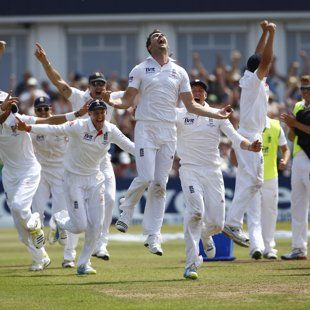 Resuming the day at 174/6 while chasing a target of 311, Australia’s lower order tried to weather the storm but lost three wickets in the morning session, going nine down with the scoreboard reading 231.

England pacer James Anderson, named man of the match, wreaked havoc for the men from Down Under taking all the four wickets of the day, ending with 5/73 in the second innings after also clinching five wickets in the first.

First innings hero Ashton Agar, who scored the highest score by a No.11 batsman and that too on debut, was the first wicket of the day for England, getting out for 14.

Peter Siddle (11) tried to put up a partnership with wicketkeeper batsman Brad Haddin but was caught by England captain Alastair Cook. At this point, with still 80 runs to chase and just one wicket remaining, the game looked out of reach for Australia.

But in came No.11 batsman James Pattinson, who along with Haddin, struck a 65-run partnership to revive Aussie hopes. Left hand bat Pattinson hit two boundaries and a six for his 25 helping Haddin, who hit an almost match-winning 71.

The last pair went into lunch at 291/9, 20 runs away from a remarkable victory, producing the jitters in the England dressing room.

After lunch, Australia put on five more runs before Haddin, who lasted at the crease for three hours and 35 minutes hitting nine boundaries, got caught behind off the bowling of Anderson.

England now lead the five-match series 1-0 at home and the next Test will be played at Lord’s from Thursday.