New Delhi: Worried over increasing tiger deaths each year and many due to poaching and poisoning, India plans to start round-the-clock electronic surveillance of some of the tiger habitats using high definition cameras.

After the satisfactory results of a pilot study in the Kalagarh range of the Corbett National Park, the National Tiger Conservation Authority (NTCA) has decided to expand e-surveillance to Assam’s Kaziranga Natonal Park, Madhya Pradesh’s Ratapani Wildlife Sanctuary and the Ramnagar division surrounding Corbett. 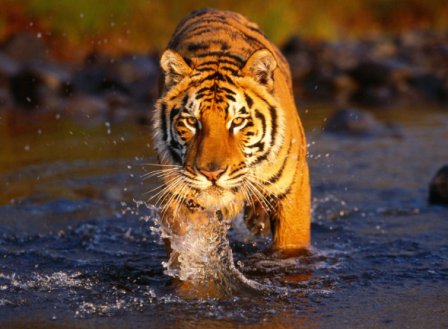 Under the project, high resolution thermal and infrared cameras mounted on towers will capture image of objects weighing more than 20 kg in a range of 3-5 km and generate alerts if they cross the boundary.

“The use of technology is one way to ensure safety of tigers. We are in the process of improving technology and monitoring methodology in tiger habitats. We are planning to get more tiger habitats under electronic surveillance,” says a senior official of the environment ministry.

“Electronic surveillance helps in two ways by keeping an eye on unauthorised people entering into the tiger habitat areas and tigers straying into human habitat,” he said.

2012 saw the highest tiger mortality in the past one decade with 88 deaths and an alarming 53 falling prey to poachers. The most tiger deaths were reported from Maharashtra and Karnataka.

This year 46 tigers have died till July 15 and body parts of two have been recovered. Again, Karnataka with 12 deaths is ahead followed by eight each in Maharashtra and Uttarakhand.

According to officials, many tigers are poisoned by local people residing near their habitats for the big cats stray into human habitat and attack them and lift animals for prey.

“If we have the information beforehand of a tiger spotted near human habitat, we can send a rescue team to tranquilize the animal,” the official added.

The pilot project ‘electronic eye’ was started in Corbett last year to test the efficacy of these cameras. And after the satisfying results, the decision to use technology in other areas was taken, the official said.

The surveillance in Corbett was carried out by a Pune-based company, Binomial Solutions Private Limited, set up by a group of young engineers and management graduates.

“We submit to authorities monthly details of infiltration by animal and man into the surveillance zone. It is a fool-proof anti-poaching system that gathers information, does processing, filtering and then sends alerts,” company CEO Ravikant Singh said.

Tiger activists hail the process but say it has to be managed properly to deliver full benefits.

“A similar effort was made in 2010 in the Bandhavgarh National Park (in Madhya Pradesh), where CCTV cameras were installed but at present none of them is functional. So how the project works on a long term basis is more important,” said Ajay Dubey, secretary of Prayatna, an environmental action group.

Tiger conservation in India began in 1973 with the launch of Project Tiger by the central government. Considering the urgency of the situation, Project Tiger was converted into NTCA, a statutory authority, in 2006 with more power and separate funding.

The main achievements of Project Tiger are excellent recovery of the habitat and consequent increase in the tiger population in the reserve areas, from a mere 268 in nine reserves in 1972 to 1,706 in 43 reserves in 2012.