Picked up from where it was left the last-time (in Fukrey); the goody-goody breed of Dellizens charting out a victory march, following a typecast David vs. Goliath duel.

The third venture by the director Shashant Shah after Dasvidaniya and Chalo Delhi, Bajatey Raho is archetypal con-comedy revenge by a group of innocent guys those were duped for their over-ingenuousness by a devil with a stone-heart. The flick is more of an anecdote of middle-class from Purani Dilli taking on a battle with insatiable conman from Gurgaon. 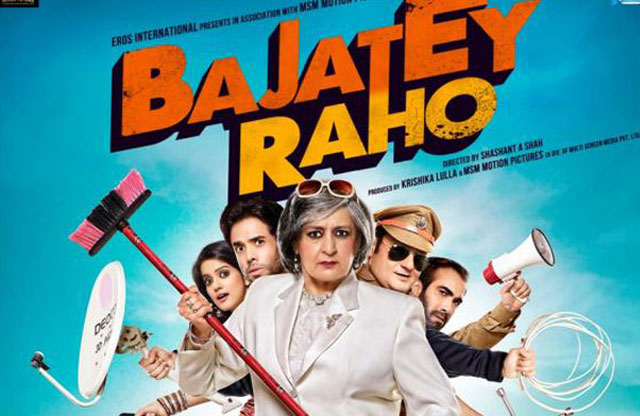 Supposed to be a rib-tickler (in Khosla Ka Ghosla style) the movie is similar to the con-comic scripts of late. When the end becomes too predictable, it’s difficult to keep the audience glued to their seats anymore.

Coming to the screenplay penned down by Zafar Khan and Akshay Verma (written dialogues as well), the narrow storyline presents thin-margin even to the cast of repute as this, to craft something out of the commonplace. All of them are underused if not misused.

Mummyji (Dolly Ahluwalia) fresh from her National Filmfare Award, plays a widow of honest bank officer (Baweja) who was duped by the father-of-evil Sabbarwahl (Ravi Kisen) the bank owner.

Sued by the bank investors for his alleged role in duping investors of their hard earned savings, Baweja was jailed along with another employee of the bank Saira, wife to Mintoo Hasan (Vinay Pathak). This follows with Baweja losing his life to cardiac arrest. It brings about a change in the life of Mummyji, her son Sukhi (Tusshar Kapoor), Ballu (Ranvir Shorey) and Mintoo.

Then commences delightful escapades, when Mummyji takes hold of the underdog-group to fight evil with his own wicked sword  —  which ends up in complete ‘bajao’ of Sabbarwahl’s dhol. But not before, Sukhi who runs a cable TV company shakes a leg or two pointlessly with Manpreet (Vishakha Singh) who also joins the bandwagon to hoodwink Mohan ji aka Sabbarwahl dance to her seducing Salsa steps. Ably guided by hot-headed Ballu’s slyness and composed checkmates by Mintoo, the small fries come out conquering.

Ravi Kisen acts well but perfect Punjabi dialect is still miles away from him. But, his scenes with his aide Brijender Kala (Bagga) are hilarious despite PJ’s (Poor Jokes) Kala reads out from his mobile phone. Brijender has come out a long way from his filler performances in movies (such as Haasil, Jolly LLB, Pan Singh Tomar) to impress with this curiously humor packed solid show. Vinay Pathak is grossly unexploited and that too by a director who has awarded him comprehensive roles in his previous two ventures. Ranvir Shorey plays restrained and delivers in his trademark style “agar ye log fridge mein paisey rakhtey hain to kya dahin bank mein jamatey hain” – but his personal grudges or motivation against Sabbarwahl that keep him going in the con-game go undescribed. Tusshar Kapoor is just fine but he playing a lead role is hilarious in itself — apologies to Ekta despite her constant disapproval.

Vishakha Singh is adorable while daughter of Kisen is just there to play quibble between the unquenchable father-son duo and Kissen.The episodes of ‘mata ki chowki’ featuring Narender Chanchal look-alike is becoming a fashion now in almost every Punjju-Dilli based movies – the last seen in Fukrey.

Music by Jaidev, Honey Singh and RDB is just fine to be played on marriage occasions complimented by drunken dance steps. The movie promises a cheerful ending with a coup devoid of any bloodshed. The flick should be tried this weekend, if not booked a seat for Issaq already.

**The movie gets 3 stars on the scale of 5 from Hillpost.