New Delhi:  Resembling Darth Vader of “Star Wars”, this six-foot-tall figure in a hooded kurta and a rucksack on his broad shoulders walks on the Indian road unfazed by the curious gaze he receives from passersby. These sartorial fashion choices are a deliberate attempt to attract attention, says Max Chandra, who is on a mission to walk 12,000 km across India for raising funds.

The 47-year-old’s ambitious project is generating funds for his charity foundation – One Step at a Time – that has various projects to promote education, provide school equipment and help people in disaster-hit zones.

And to generate money for these activities, he has chosen the unusual way of walking and covering 28 states on foot. 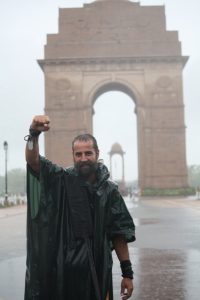 “When people look at me on the road, they wonder who is this ninja guy,” Chandra said in an interview.

“It is a deliberate attempt to make people curious. The more people know about my mission, the more people will talk about this unusual way of generating funds, and more helpful it will be for my foundation,” he added.

Born to a German father and an Indian mother, Chandra was brought up in Britain. He started his epic journey in Novembner 2011 from Goa and has crossed Karnataka, Kerala, Tamil Nadu, Andhra Pradesh, Maharashtra, Gujarat, Madhya Pradesh, Rajasthan and Haryana. He reached the capital recently after covering Rishikesh, Chandigarh, Simla, Manali and then back to Delhi via Punjab and Haryana.

“It will take me another year to complete the walk,” says Chandra, who has been self-financing the effort.

“I don’t walk at one go. I walk for three months, then take a month’s break to work on my projects and recuperate . Then I walk again for three months and so on. It balances my work and this mission,” said Chandra, who carries the bare minimum essentials in his rucksack, two cameras and a spare pair of shoes.

Chandra plans his own itinerary, starts walking by six in the morning and stops for five minutes after an hour-long walk. At times he sleeps under the stars and if he is lucky to have received an invitation from a local, he will stay with him. His daily routine also includes washing clothes, making notes and looking at the pictures he has taken during the course of the day.

“I can’t plan in advance as there are so many factors: weather, terrain and area. So, it is an everyday process,” he explained.

It wasn’t by chance that Chandra decided to quit his job as a CEO in London after his first visit to India in 2005. His mother had given him a fairytale description about the country. “She would talk of cobras and snakes. It was so mythical. But later I discovered for myself what it meant to be in real India.”

Chandra, who has the backing of Social Access Communications, a communication firm that works for the social sector, candidly admits if he wasn’t walking, no one would have heard about his project.

“When I walk I see there is so much to be done in the rural sector: education, sanitation, roads, environment, garbage…there is so much. But no one is doing anything,” Chandra said.