Major and minor tremors have continued to rock the Bharatiya Janata Party (BJP) ever since Narendra Modi’s appointment as the campaign chief for the 2014 general elections.

While the Janata Dal-United’s decision to break away from its alliance with the BJP, and senior leader L.K. Advani’s patent dissatisfaction with Modi’s elevation can be counted as major shocks, the minor ones include the resignation of a BJP vice president, Amir Raza Hussain, in protest against the Gujarat strongman’s use of the word burqa, or veil, to describe the Congress’s tactics.

Modi’s comment that the Congress covered itself with the burqa of secularism whenever it was in trouble might have been regarded as an attempt at humour, but the BJP’s former member saw it as a dig against the practice of Muslim women covering themselves with an all-enveloping cloak. The observation can also be interpreted as a sly reiteration of the longstanding saffron equation of secularism with the Congress’s policy of minority “appeasement”.

The remark might not have touched a raw nerve if, in an interview with a foreign news agency, Modi had not compared the impact of the Gujarat riots on him with the pain caused by the running over of a puppy by a car. To make matters worse, the chief minister had boasted during the interview that he was a Hindu nationalist.

The observation led to the Congress’s Digvijay Singh asking why he didn’t call himself an Indian nationalist. Since then, posters proclaiming Modi’s patriotism and Hindu nationalism have appeared in Mumbai, provoking speculation about the BJP’s line.

What these episodes show is how closely each of Modi’s words and deeds is scrutinized because of his deeply-hued saffron background. To compound the situation, the assertion by his aide, Amit Shah, that the Ram temple will be built in Ayodhya, and Modi’s own visit to the Jagannath temple in Puri, have tended to confirm the impression that he is taking the party back to its hardline Hindutva agenda.

The suspicion is deepened by the fact that the Hindu supremacist Rashtriya Swayamsewak Sangh (RSS) has seemingly thrown its full weight behind Modi and clearly wants him to be the BJP’s prime ministerial candidate. 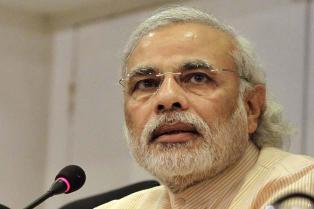 Yet, if the BJP is taking its time over naming him, it is probably because of two reasons. One is the internal opposition by Advani and Co. and the other is the fear that his projection will restrict the BJP’s appeal mainly to its core group of supporters to the exclusion of minorities and liberals.

It is in this context that Modi’s latest utterances have been seen as playing into the Congress’s hands. The eagerness with which Congressmen have sought to counter Modi – the veil of secularism is better than “naked communalism”, as Ajay Maken said – shows that they are happy to lure the BJP’s poster boy into the secular vs communal debate where he will be at a disadvantage.

It is to avoid this trap that the BJP’s Yashwant Sinha has advised Modi to stick to his development plank and not veer into the quicksand of ideology and identity politics. Although Modi started off with an emphasis on the Gujarat model of economic progress, the series of public functions and interactions with the media are apparently forcing him to digress into controversial areas.

Indirect pressure from his supporters in the social media may have also played a part in making him trash the Congress’s version of secularism. A reference to one of the less offensive comments circulating in the cyber world will demonstrate the attitude of his supporters.

“Today, the Congress parasites and the Gandhi family worshippers have made being a Hindu in India something shameful while barbarians who kill women and children by planting bombs and attacking train stations have become secular”, said a pro-Modi post on the internet. However, there is probably a feeling in the Modi camp that if he listens to the counsels of restraint, his appeal will seem diluted not only to his ardent supporters but even generally, since he has purposefully cultivated an aggressive image.

The Congress will be pleased, however, if he continues in the same vein. There is little doubt that the party will be uneasy with any focus on governance, considering how its own “deficits” in this respect were noted by union Finance Minister P. Chidambaram not long ago. On the secular-communal divide, however, it apparently feels that it is on a much stronger wicket although a section of the media feels that there is too much emphasis on the majority-minority factor.

But, for the Congress, it is the only subject on which it can hold forth with some assurance since the background of scams, policy paralysis and economic slowdown cannot but make it defensive. What is more, like the BJP, the Congress, too, is unwilling to name its prime ministerial candidate, though for a different reason. It is that while Manmohan Singh has lost much of his earlier appeal, Rahul Gandhi hasn’t quite lived up to the part.

by Amulya Ganguli (IANS) is a political analyst.