Chandigarh: Shiromani Akali Dal president Sukhbir Singh Badal today said that his father, Chief Minister Parkash Singh Badal, will continue in the top job after the SAD-BJP combine was voted back to power in the assembly elections. 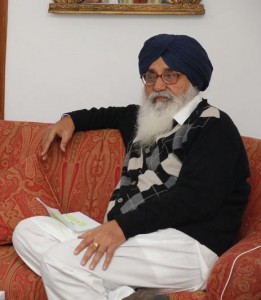 Talking to reporters before going for a legislature party meeting of the Akali Dal here Thursday morning, Sukhbir said that Badal senior is the only choice for being chief minister.

“As Akali Dal president, I announce that Badal Sahib (Parkash Singh Badal) will be the next chief minister also,” Sukhbir said here.

His election as leader of the Akali Dal legislative party leader is likely to be a formality after Sukhbir’s announcement.

The Akali Dal will have another meeting of its core committee later Thursday evening followed by a meeting with alliance partner BJP here Friday.

There has been speculation in Akali Dal and political circles here on whether Parkash Singh Badal, 84, will agree to a record fifth term as chief minister or whether he will ask his son and Akali Dal president Sukhbir Singh Badal to take charge.

Sukhbir Badal, who is the deputy chief minister in his father’s outgoing government, led the Akali Dal campaign from the front and was the most visible face of the party compared to his ageing father.

Party leaders are crediting him for the historic victory of the Akali Dal-Bharatiya Janata Party (BJP) combine in the assembly poll.

Beating the traditional anti-incumbency factor, the combine bagged a comfortable majority with 68 seats in the 117-member Punjab assembly as results were declared.

It is for the first time in over four decades that a government has been able to return to power for a consecutive term in Punjab.

While the Akalis won 56 seats, the BJP bagged 12 seats.

The Congress, which was hopeful of returning to power this time, got only 46 seats.