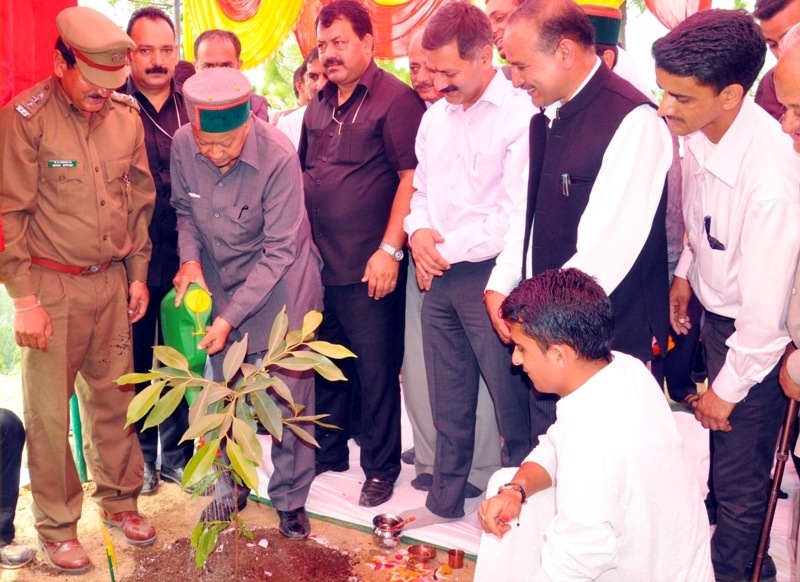 Shimla: Himachal Pradesh Chief Minister Virbhadra Singh Sunday said 17,500 hectares of land in the state would be re-greened this fiscal.

Speaking at the state-level ‘Van Mahotsav’ (sapling plantation) function at Shamlaghat near here, he said 60 percent of the trees planted would be broad-leafed species, of which 20 percent would be wild fruit species.

“Planting of wild fruit species will go a long way in checking the monkey menace in towns and villages, as the animals will get enough fruit in the forests,” the chief minister said.

Virbhadra Singh, who launched the plantation drive by planting a “jamun” or syzygium cumini sapling, said the government was considering restoration of the timber distribution rights of farmers to fulfil their needs in house construction or for cremation.

The chief minister said forest and agricultural land at some places was infested by weeds, especially ‘lantana’. “About 1.85 lakh hectare of forest land was infested by weeds and the government has made a provision of Rs.5 crore during this year for the treatment of 5,000 hectare weed-infested land,” he said.

Wooden crates were banned for use in packaging apples, and cardboard boxes were to be used, the chief minister said, to help save forest wealth in a big way.

He said a modern cardboard carton factory was set up at Gumma in Pragatinagar in Shimla district, to supply packaging material to fruit growers.

He said it was unfortunate that the carton factory was closed (by the previous BJP government) and its machines, costing about Rs.80-90 crore, sold at a throwaway price of Rs.2 crore.

“I have got information that the same machines were re-assembled in Nagpur (in Maharashtra) and were producing cartons which were being sold in Himachal. I am ordering an inquiry into the matter,” he said.

Regarding unscientific exploitation of the medicinal herb “nag chhatri” in view of its recent growing commercial value, the chief minister asked officials to check its illegal extraction.

An official said “nag chhatri” is being used as an aphrodisiac, and was smuggled out of the state, mainly by Nepalese labourers.

The Forest Survey of India report of 2011 showed that the hill state’s forest cover had increased in the last two decades from 21.16 percent to 26.37 percent.