Chandigarh: Haryana’s state-run buses are going through a bumpy ride in Delhi.

With Delhi Police imposing penalties for various traffic violations, drivers and staff of Haryana Roadways have become reluctant to ply their buses in Delhi territory. The roadways staff staged one protest last month – by not letting Haryana buses enter Delhi – and were on the brink of a three-day strike from July. 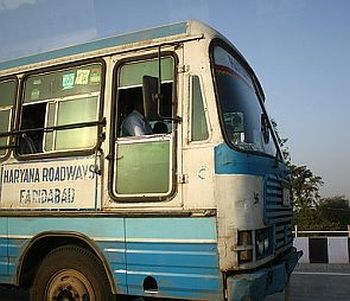 The reason for all this is the number of traffic tickets being issued by the Delhi Traffic Police to Haryana Roadways buses plying in the national capital. The issue has become so serious in Haryana that the director general (State Transport) Arun Kumar has been forced to call meetings with the roadways staff union to work out a solution to the issue.

“The state government cannot encourage violation of traffic rules. Safe driving was a pre-condition of the driving licence which needed to be obeyed,” Arun Kumar reportedly said at the meeting.

Most of the traffic tickets are for over-speeding, wrong parking, jumping red lights and rash driving.

The staff of Haryana Roadways buses had refused to ply their buses in Delhi territory June 15 to protest against “excessive” traffic tickets being issued against them. The buses had dropped passengers at the entry points to Delhi along the Delhi-Haryana border. This caused widespread harassment and inconvenience to passengers.

Union leaders alleged that Delhi Police was trying to single-out Haryana Roadways buses as the roadways staff was not allowing them to travel for free in their buses.

At the meeting with the union, Arun Kumar suggested that a corpus be created by the employees by contributing one day’s salary for paying the traffic tickets.

The state transport authorities have now said that a team of officials will monitor the tickets being issued and even videograph the process.

After the employees’ union called for a three-day protest by not plying buses to Delhi, Arun Kumar warned them of strict action. Following this, the protest was withdrawn.

“For those drivers and conductors, who had participated in the June 15 protest, it was decided that the loss on account of not plying buses to Delhi must be recovered from the driver and conductor of the bus. Also, criminal cases should be registered against those union leaders who were present there and physically obstructed and prevented the buses from going to Delhi, caused obstruction in the discharge of official duties and forced the passengers to alight from the buses,” Arun Kumar said.

For the time being, both sides have reconciled over the issue, with the state transport authorities agreeing to “constitute a committee to study the actual pattern of challans (tickets) issued by Delhi Police”.