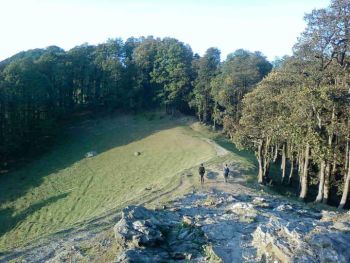 To make matters worse, mild tremors have been experienced in the state one after another in the past one month.

As a result, tourist-footfalls have fallen by more than 70 percent compared to the previous years during this month and the occupancy of hotels has plummeted, say members of the hospitality industry.

“The meteorological office has been forecasting heavy to very heavy rainfall across the state since the last fortnight but rainfall has been normal,” Harnam Kukreja, president of the Shimla Hoteliers and Restaurants Association, told.

He said this has created a fear psychosis among tourists.

“Since the Uttarakhand disaster (June 17), tourists – especially foreigners – have started following the weather office alerts seriously,” he said, adding that most bookings have been cancelled.

Manali Travel Agents Association president Anil Sharma said most of the tourists, mainly foreigners, are heading to Leh in Jammu and Kashmir.

“From July to September, Manali and its nearby destinations get a good number of foreigners for adventure-related activities. This time, the closure of National Highway 22 at several points for over a month due to flash-floods (in Kinnaur district) has led to the slowdown in tourist arrivals,” Kukreja said.

Backpackers, especially from the US, Britain, Italy, France and Germany, come to Manali every year during this period for adventure-related activities like trekking, rock-climbing and cross-jungle trekking.

Most of them prefer to drive down either to the 475-km-long Manali-Leh highway or the Manali-Keylong-Kaza trans-Himalayan Buddhist circuit.

The Manali-Leh highway is open, but the Buddhist circuit from Manali is closed beyond Sumdoh in Spiti sub-division towards Pooh in Kinnaur.

Sumedha Sharma, a tourist from Delhi, said: “This time we planned to cover the Dalhousie and Dharamsala circuit, but frequent news of earthquakes from the hill state forced us to cancel our bookings.”

Added Himachal Pradesh Tourism Development Corp (HPTDC) general manager Yogesh Behl: “The occupancy in almost all our hotels is not more than 35 percent. Normally, Manali remains lively till July 15, but this season the downward trend started in June-end.”

HPTDC has 57 economy and high-end hotels across the state.

According to the meteorological office in Shimla, the latest tremors were of magnitude 4.5 on the Richter scale and were felt for a few seconds in several parts of the state July 14.

The state economy is highly dependent on hydroelectric power, horticulture and tourism.

Himachal Pradesh, known for its delicious apples, a World Heritage railway and picture-perfect tourist spots, last year attracted 1.61 crore tourists, including 497,850 foreigners, a state tourism department report said. At present, 2,169 hotels with a total capacity of 55,928 beds are registered with the state, it said.