When Congress general secretary Digvijaya Singh said that a decision on Telangana would be taken soon, it did not surprise many as similar statements have often come from party leaders and even Home Minister Sushilkumar Shinde.

However, unlike in the past, this time the party did not set any deadline for announcing a decision. So, this time the suspense will be not only on what decision the party will take but also when. 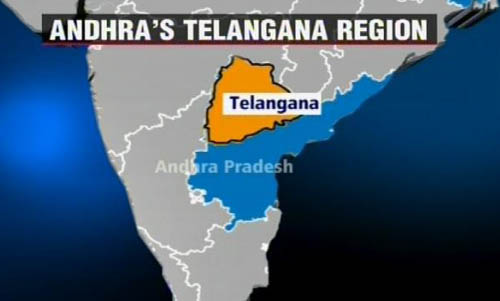 Except for a section of Congress leaders from Telangana, not many believe the party would soon take a decision on the contentious 60-year-old issue.

Digvijaya Singh’s statement, made on his first visit to Andhra Pradesh after taking over as the party in charge of the state, brought cheer to Congress leaders from Telangana, buoyed with the success of their public meeting here on the issue.

After an all-party meeting Dec 28, 2012, Shinde declared that a decision would be announced in a month. But a day before the deadline, Health Minister Ghulam Nabi Azad, then the party in-charge in Andhra Pradesh, poured cold water by stating that “one month does not mean 30 days”.

When two Congress MPs from Telangana and senior leader K. Keshava Rao joined the Telangana Rashtra Samithi (TRS) this month, Azad stated that a decision will be taken “this month”. Before he could be reminded of his promise, the party leadership replaced Azad with Digvijay Singh.

Digvijaya Singh stated that the chief minister, his deputy and state Congress chief have been asked to prepare a road map on the strategy if the decision is taken either way.

When reminded of Dec 9, 2009 statement of then home minister P. Chidambaram that the process of formation of Telangana state will be initiated, Digvijaya Singh remarked that the process has started.

While Congress leaders from Telangana interpreted this to hint at an early favourable decision, their counterparts from Seemandhra (Rayalaseema and Andhra) did not find any reason to panic. Only a couple of MPs threatened to quit — unlike in 2009 when mass resignations had rocked the party.

Perhaps tired of many statements in the past, the main opposition Telugu Desam Party (TDP), the TRS and other opposition parties refused to attach any significance to what Digvijaya Singh said, saying they will react only after the Congress makes an announcement.

Only two days after Digvijaya Singh’s statement, the state election commission announced that elections to gram panchayats or village-level local bodies will be held in three phases on July 23, 27 and 31.

The model code of conduct, which came into force with immediate effect, will remain till the process is completed in early August. It means that the Congress will not be able to make an announcement on Telangana this month.

This once again gave the TRS and others an opportunity to question the Congress’ sincerity. They alleged that Digvijaya Singh’s statement was another attempt by the party to “fool” the people of the region.

However, Congress leaders like D. Srinivas insist that the party was sincere on the Telangana issue. The former chief of the state Congress is sure the party will abide by its word.

The leaders from Telangana, in recent weeks, have tried to impress upon the leadership the political advantage that will accrue to the party by carving a separate state.

“The TRS leaders themselves have said many times that the party will merge with the Congress if the process for Telangana state is initiated,” said Srinivas, who is ready to negotiate with TRS for a merger.

Senior leader V. Hanumantha Rao believes that the Congress can win 15 out of 17 seats in Telangana by carving out a separate state.

Andhra Pradesh, which has 42 Lok Sabha seats, had played a key role in formation of the UPA government in 2004 by giving 29 seats to Congress. The tally went up to 33 in 2009.

However, a few months after he took over as the chief minister for a second term, Y.S. Rajasekhara Reddy died in a helicopter crash, plunging the state into political instability and a bitter fight over Telangana.