Dehradun: With the old 14 km trek from Gauri Kund to Kedarnath having been washed away completely by the June 16 floods, the army has been asked to open a route for the Kedarnath shrine, so that pilgrimage can begin in a couple of months. The Central Command of the Army is working upon it from July 10. 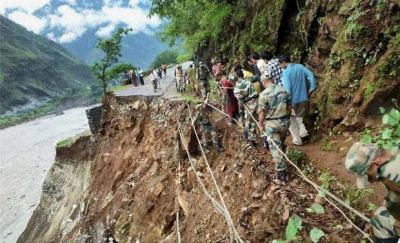 Informed sources said that a team of the Central Command, had crossed the Vasuki Ganga from Son Prayag and had started working on the new alignment that would be taken for the new trekking route to the shrine of Lord Shiva. The team comprising of 21 members  is trying to ensure that there is not too steep an ingredient for the pilgrims.

They said that efforts are to have the route on the other side of the hill of the existing route via Ram Bara, Jungle Chatti and Garud Chatti and take it from Son Prayag-Gomkara- Dev Vishnu-Dhanugaj Giri and on to Kedarnath. Though the alignment and the route is yet to be finally decided upon, but it has been decided to take this route in a bid to do away with the memories of the tragedy and also reports that a number of bodies littered the route.

Sources said that as the 20 km trek is going to be a bit too much to do at one stretch, specially for the aged, inform, women and children, it has been decided to have a stop at Gomkara. “Ram Bara was the stop on the earlier route where the pilgrims could stop for some rest and the mules were also given jaggery and gram for the tough trek and Gomkara will now be the point for this”, they claimed.

They said that hopefully the team will reach Kedarnath in the next couple of days and will discuss the finer details of how well it can be developed over the coming months so that pilgrimage to the Kedarnath shrine can start as early as possible. However, before a green signal is given, the route will be supervised by the Uttarakhand government authorities also.

With the char dham yatra being the main stay of the economy of the upper regions of Uttarakhand and Kedarnath being one of the important shrines, the Uttarakhand government has been keen to ensure that the yatra starts as early as possible. Chief minister Vijay Bahuguna said that efforts are on to ensure that all roads are repaired and the yatra begins as early as possible.