Disaster management officials told that most parts of the state had been battered by heavy rainfall since yesterday night. 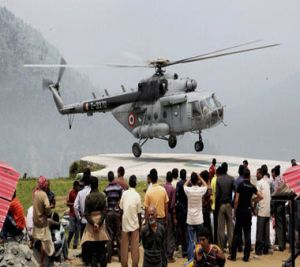 Most of those yet to be rescued were caught up on the route to Badrinath, one of the most revered Hindu places of worship and close to Kedarnath, which bore the brunt of the cloudburst and heavy floods over 10 days ago.

Smaller choppers which tried to fly returned to their bases at Joshimath and Harshil because of the adverse weather.

Fresh rains and landslides have also hit rescue by foot in some places, as well as the identification process of the dead.

The rescue operation is being led by the army, air force and the Indo-Tibetan Border Police.

According to disaster management officials, hundreds of people may have perished due to cold and hunger in Jangal Chatti area after surviving the June 14-15 disaster.

Uttarakhand officials refused to give any update on the death toll in the state, which most sources say is in the region of hundreds.

Extensive rains have flooded roads and highways in Udham Singh Nagar, Lal Kuan and Kathgodam in the plains of Uttarakhand.