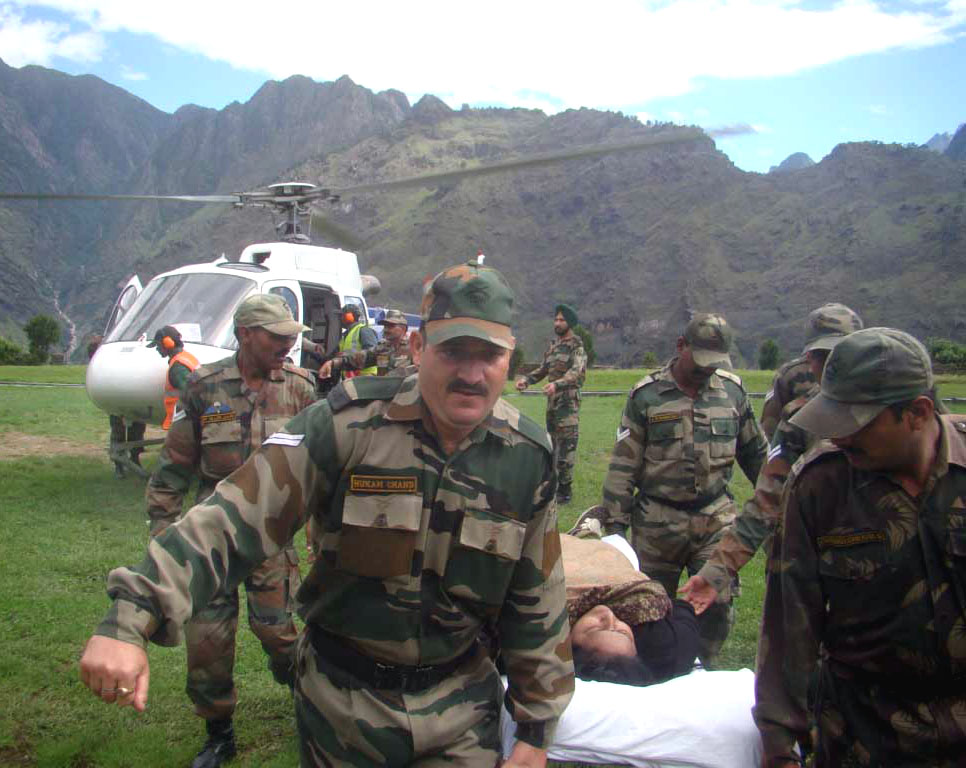 Dehra Dun : The inclement weather took its first toll of the rescue and relief operations when an Indian Air Force M-17 V5 helicopter crashed near Gauri Kund. Though the fate of the pilot was immediately not known, but eight defence personnel who were aboard are feared to have died in the crash.

While speculations are that the inclement weather may have been the reason for the crash, as most parts of Uttarakhand are having moderate to heavy rains, and there has also been a cloudburst in Tehri district, but reports said that a technical snag in the chopper which was on relief and rescue operations could also have been the reason.

Initial reports trickling into the state headquarters said that a pilot of a helicopter belonging to a private company which was also on the same axis actually saw the IAF chopper crashing. They said that the IAF helicopter had gone to bring some army personnel who were at Gauri Kund and it is feared that the seven or eight army personnel who had boarded the ill-fated machine had died.

Incidentally, Gauri Kund is the base camp from where the yatra for Kedarnath starts and the holy temple is at a distance of 14 kms from here. The 14 kms is a steep trek that pilgrims normally do on mules or in palanquins that are carried by four persons. There is a halt at Ram Bara, which is seven kms from Gauri Kund for the pilgrims, porters and mules to rest before embarking on the remaining seven km equally arduous trek.
Meanwhile reports said that the villagers in and around Gauchar, which is from where the main rescue work is operating from as most of the IAF choppers are stationed here to reduce the time going and coming from Kedarnath and Gauri Kund, had started donating fuel wood that they normally collect for their personal round-the-year kitchen needs so that the last rites could be undertaken of the bodies that are strewn around and inside the temple at Kedarnath.

Besides the fuel wood the villagers are also contributing ‘shudh ghee’ for the last rites. The authorities have decided to have mass cremation of the pilgrims whose bodies lie strewn inside the temple and around the complex. This is being done as it is being feared that epidemic could break out if the bodies are not cremated as the place has already started smelling of rotting flesh.

However, many feel that the authorities could have undertaken the work of removing the large number of bodies, almost over 500 that could be lying buried under the debris that is litterd all over the place. As per reports there is almost five to six feet of debris that has covered the path leading to the temple and its steps and it would be a Herculean task to remove the debris, as it would have to be done manually.
State government officials confirmed that hectic efforts were being undertaken to get all the stranded pilgrims out, but the weather was a damper. With the meteorological department forecasting moderate to heavy rains in most parts of the state during the next 48 hours, it is very doubtful that the remaining about 10,000 people who are still stranded could be evacuated.

Incidentally Congress vice president, Rahul Gandhi who was at Gauchar last night moved around to the devastated areas in a chopper and met some of the survivors and locals. While the people were all praise for the armed personnel who were working round-the-clock to save the people, they narrated the utter apathy and sheer neglect of the state government and district authorities in the relief and rescue operations, adding that if it was not for the armed forces, the death toll would have more than doubled.