Shimla: A total of 1,395 people have been evacuated from rain-ravaged Kinnaur district of Himachal Pradesh over the past seven days, an official said here today.

“About 200-300 locals are awaiting evacuation. All stranded tourists were evacuated by Monday,” a government spokesperson told. 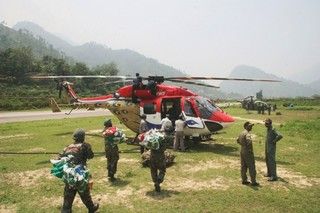 He said one helicopter of the state government and three of the Indian Air Force (IAF) are engaged in airlifting stranded locals.

“No sorties were flown today due to inclement weather. A team of National Disaster Response Force evacuated people from Sangla on foot,” he added.

The spokesperson said the government has released Rs.18 crore more to speed up relief and rehabilitation work across the state. Earlier, Rs.10 crore was released.

Of the total released amount, Rs.21.5 crore has been released for Kinnaur alone.

“The estimated losses to infrastructure due to heavy rainfall was pegged at around Rs.2,575 crore,” he said.

Meanwhile, the road link between Akpa and Kiran Khud and Sumdo-Kaza-Gramphu axis has been restored. The approach road to Skiba village along with the national highway-22 and that of Kharo has been badly damaged.

He said as per the assessment of the Border Roads Organisation, most of the roads would be restored in another week.

The stretch between Kashang and Akpa, which was badly damaged due to massive landslides, may approximately take a month to be rebuilt.