Chandigarh: Barbs aplenty on a variety of issues have for long been hurled at Bhupinder Singh Hooda but the Haryana chief minister of eight years doesn’t seem to care a fig. 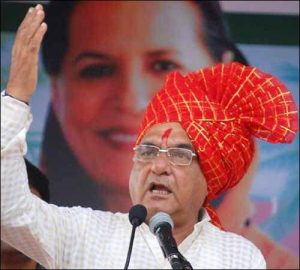 From apparent discrimination against southern Haryana vis-a-vis Hooda’s home district Rohtak on the development front to rising crimes against Dalits, prominent Congress leaders have been raising issues against their own party’s government but have not been able to make much headway.

Selja, the Congress MP from Ambala, said at a recent rally in Karnal that crimes against Dalits were increasing in Haryana but the state government was not doing much about it. She alleged that Dalits were being discriminated against in the state.

Selja had recently also complained to Congress vice president Rahul Gandhi against the Hooda government and its officers when he visited Panchkula, adjoining Chandigarh, to address party leaders.

The union minister’s perceived proximity to Sonia Gandhi saw the Congress president visiting Sachhakhera village in Jind district last October to meet with the family of a Dalit gang-rape victim who had committed suicide. More than anything else, the move was seen as an attempt to embarrass Hooda.

Within his government, Hooda has faced pot shots from his ministers Ajay Singh Yadav and Kiran Chaudhary in the past. However, both the ministers have been lying low in recent months.

Hooda seems to be the least bothered about his detractors.

“I don’t need a certificate from these leaders,” Hooda said recently.

Accusing the detractors of spreading misinformation about his government, the chief minister said that they were doing so in their “struggle for (political) existence”.

With top leaders Om Prakash Chautala and Ajay Chautala of main opposition party Indian National Lok Dal (INLD) behind bars after their conviction in a recruitment scam, Hooda faces more opposition from within his party than from others.

With assembly elections due in Haryana in October next year, preceded by Lok Sabha elections, the Congress needs to set its house in order.

The Congress and Hooda, who have been in power in Haryana since March 2005 – bring returned in October 2009 – need to ensure that they don’t let go the opportunity when the opposition looks like being decimated for the time being.