When Boyzone finds bonhomie —–“Boyomie,” on the bylanes of Delhi and fortunes congregate to mint some easy moolah through foolhardy dreams, a series of escapades occur which are compelling enough in tickling the funny bone. 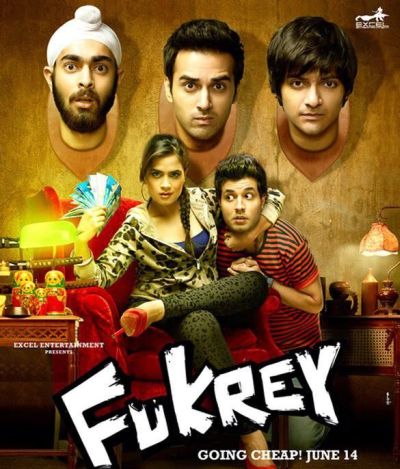 Fukrey, that works on the same plot as Inception for its “dream value” (in jest) is about newly fashioned expletives, funky college life, wooing girls and struggle against self-appointed dilemmas.

Directed by debutante Mrighdeep Singh Lamba, Fukrey is the continuation of same Dilli based “Boyomie” saga – a Delhi cliché of sorts – where happenings in life get hysterical when one in the group gets too exploratory with his aspirations. However, the treatment to the script is spanking new.

Honey (Pulkit Samrat) and Choocha (Varun Sharma) are the bicycle riding school lads that aspire for funky college life – the Dilli way— although failing thrice in the process. Lali (Manjot Singh), the son of Billa Halwai wants to secure backdoor entry in the college of his beloved after getting ditched despite providing a pick and drop service devotedly on his bullet motorcycle. Zafar (Ali Fazal), who is as exhausting as a hot day in June, wants to excel in the world of music. Then enters Pandit (Pankaj Tripathi), who promises to provide them final exam papers (after leaking them) for a cost of Rs 50,000.

Destiny unites these academically retarded foursome at one point and all decide in an amateurish accord to sell their dreams (literally) to the foul-mouthed pimp and drug dealer Bholi Punjaban (Richa Chaddha) who decides to invest in their “dream investment plan” to earn some cash.

It’s interesting to learn if Choocha whose bizarre comical dreams, which won them easy moolah after getting decoded by Honey previously too, will ensure them further riches.

A comedy of errors in the bylanes of Delhi, Fukrey is packed with humoristic dialogues. All praises for Honey and Choocha (for his gullible tomfoolery) for their witty means that don’t allow audience to lose clasp on the storyline. Though, choicest of Punjabi curses get too overboard at times but that is what you expect from the makers of Delhi Belly.

Lali, Oye Lucky Lucky Oye fame, is perfect in his role and dishes out sharp dialogues with a complete straight face. Zafar is too languid and plays in the shadow of the other three.

Pankaj Tripathi is worth noticing for his “Dilli wala” type filler English words within Hindi sentences.Vishkha Singh and Priya Anand (English Vinglish girl) don’t have much in offer.

Richa Chaddha, the find of Gangs of Wasseypur is gallant and sexy in her new avatar. Her role strikes similarity with that of Neha Dhupia in Phas Gye Re Obama but Richa evolves differently with scornful ferociousness in a mirrored gym during day time and glass of whiskey with ghazals playing in the background at night. The cinematography is laudable but music by Ram Sampath is just average although such script based movies should detest from including full on scores.

The movie lacks continuity at times especially in the second half and ends on predictable ends. The entire first half takes to set up a plot and romantic angels are incorporated forcefully at times just to substantiate presence of Vishakha and Priya in the movie.

Nevertheless, Bollywood doesn’t care much about exceptional comedies especially exclusive of big names. It’s possible that Fukrey won’t be able to amass huge sums despite having all the requisite ingredients —- as movies with mindless scripts are money minters here, as evident from the recent releases.

*Fukrey gets 3 ½ stars on the scale of 5 from Hillpost.