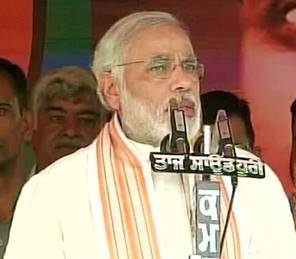 Madhopur:  The BJP top brass gave a miss here Sunday to the first public rally of Gujarat Chief Minister Narendra Modi after he took over charge of the party’s 2014 poll campaign panel, but he got ample support from Punjab Chief Minister Parkash Singh Badal.

The veteran Shiromani Akali Dal leader not only reiterated his party’s commitment to the Bharatiya Janata Party (BJP) and the National Democratic Alliance (NDA) but also showered praise on Modi and exhorted him to lead the country.

“I have told him (Modi) that he should leave Gujarat now and lead the country,” Badal said while addressing the Sankalp rally by the BJP to mark the 60th death anniversary of Jana Sangh founder, Shyama Prasad Mookerjee, in this Punjab town.

“The Congress leaders, as I see their faces, are so scared of Narendra Modi. Their faces look as if their parents (‘ma-pio’) have died,” Badal said.

He said the over 45-year-old alliance between the Akali Dal and the BJP — and its forerunner Jana Sangh — would continue and get stronger.

“The Akali Dal has always been against the Congress party. The Congress has ruined this country over the years,” Badal said.