London: A Sikh bus driver in Finland is fighting for his right to wear a turban while at work.

Gill Sukhdarshan Singh, who works at the Veolia bus company at Vantaa near the Finnish capital of Helsinki, is trying to set a precedent by making the authorities allow him to wear a turban at work, Yle, the Finnish public broadcasting company, reported today. 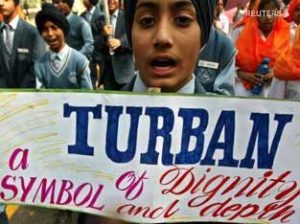 “I have a right to my turban, and I am a Sikh also,” the report quoted Singh as saying.

Singh was among the first Sikhs to move to that Nordic country in the 1980s.

After a visit to the Indian state of Punjab in December last year, he decided to wear a turban while at work.

Nobody raised any objection for two months but then the authorities concerned told him to remove it to comply with company uniform rules.

Singh’s son Sukhnavdeep Singh Gill also wears a turban and says he would like to complete his military service in Finland wearing it.

“Everybody has to and I want also to be one of them (military service),” Sukhnavdeep said.

Finland’s neighbours, Norway and Sweden, both allow Sikhs in the military to wear the turban.

Anu-Tuija Lehto, a lawyer at a trade union confederation, told Yle that she was confident any legal challenge to the turban ban would be successful.

Singh is using the issue as one of integration and acceptance in Finland.