Popularly known as “Raja Sahab”, Virbhadra Singh could be easily termed as the “Grand old man of Himachal politics.” Raja of erstwhile Busshehar princely state, Virbhadra enjoys the exclusive distinction of serving the hill state record six times as Chief Minister since he was elected for the post in 1983, for the first time. However, the present term of this aging leader could very well be termed as his last one. 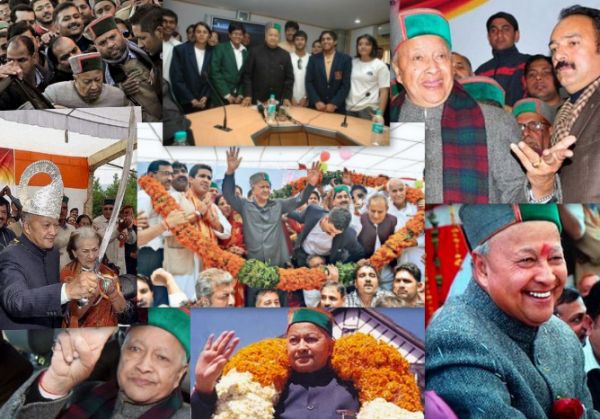 Someone who has been in thick of political battles up against stalwarts such as Thakur Jagdev Chand, Shanta Kumar and Prem Kumar Dhumal in a career spanning 50 years, Virbhadra is known to be a leader of the masses. Overcoming challenges from such experienced leaders as Thakur Ram Lal and “Chanakya” of Himachal politics, Pandit Sukhram in the party hierarchy, Virbhadra showcased an incisive political mind at a comparatively young age.

Not surprisingly there are a number of aspirants and the prime contenders are Kaul Singh Thakur, Vidya Stokes, Anand Sharma, and GS Bali.

Virbhadra’s relationship with Health & Family Welfare Minister Kaul Singh Thakur is considered strained although both shared splendid equations at one point in time.The heated exchange of words between them during the recent election campaign was witnessed by one and all. Kaul Singh is considered to be the most influential potential candidate to replace Virbhadra as he enjoys good relations with Congress supremo Sonia Gandhi and he has been President of the Himachal Pradesh Congress Committee in the past.

Irrigation & Public Health Minister Vidya Stokes has been among the most powerful antagonists of Virbhadra for past many years but the recent-patch up between the two and the limited number of years left in her political existence has silenced the critics forever.

Anand Sharma , the Commerce and Industry Minister of the country is very active in national politics but lacks generous ground support in Himachal. His name is being ruled out unless the central leadership is too pressing on him for rendering his service in the hill state..

Virbhadra’s equations with GS Bali, the State Transport Minister are not very cordial even at the best of times. In the fresh episode, his submission of resignation to Sonia Gandhi’s political advisor Ahmad Patel (only to be rescinded later) rather than Chief Minister demonstrates the growing differences between the two. It also demonstrates the personal clout of the Kangra leader with the central Congress leaders.

Unlike heirs of other well established political families, Virbhadra’s son hasn’t been able to embark on a full-fledged political journey till date.

Virbhadra’s wife Pratibha Singh who is contesting Mandi Parliamentary by-poll and strategizing hard to retain the seat previously held by her husband has a restricted and proxy political base. She is also the dark horse in race for the chief ministers’ position, something that other leaders are attempting to stall at the outset.

Leadership of Shimla district that has dominated the political landscape for a longtime is coming to an end as Virbhadra Singh and Vidya Stokes fade away from the state politics.