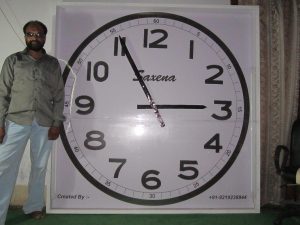 Shikohabad (Uttar Pradesh) May 30 (IANS) Concerned over his mother’s failing eyesight a state government employee here designed a wall clock with a diameter of 54 inches. Now he’s gone a step further and designed a six-foot diameter clock that is three inches taller than he is.

“I was pained to see my ageing mother straining hard to see the time on the clock. The failing eyesight made it increasingly difficult for her to read the correct time. It was then that I worked on my first wall clock which had a diameter of 54 inches. The world record till then was 49 inches. It worked on one battery cell,” Sunil Saxena, a state labour department employee in this small town of Firozabad district, told IANS in an interview.

The clock became his obsession after his neighbours and just about everyone in Shikohabad heaped praise on him. He than decided to work on the next stage of evolution.

“The hands – minute and hour – took a lot of time to be balancing and had to be made of aluminium. My wallclock has been registered with Guiness World Records. Any day now it will be declared a world record. It is already a Limca book of records,” Saxena said.

The dial is made of flex – a platic covered rubber sheet – is powererd by a Orpat quartz, has a wooden frame and runs on two battery cells.

“My mother is delighted and mighty pleased with my effort. She loves my creativity,” Saxena said.

“I have a bigger mission and I am working on it. I need support and help. The mission is to develop a solar invertor that will allow endless use of two fans and two lights. I dont want to beg, but if people see my wall clock and and are impressed by it, they would definitely support me in my bigger project that will be a boon to the masses,” Saxena said.