Shimla: Within the agro-climate zones of Himachal, Chamber of Indian Industry (CII) has recommended that besides agri-food processing industry, it was information technology that had tremendous potential of being growth drivers of the future. 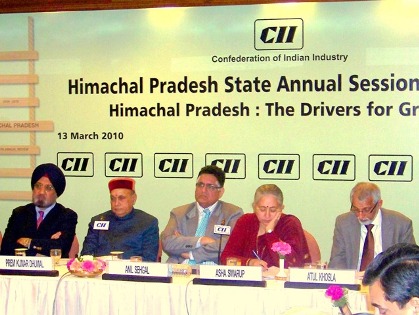 Both these sectors that were in harmony with the geographical conditions had potential to penetrate deep into the state which would generate employment as well as raise living standards in the land locked state, he said. CII also presented two study reports on these sectors on the occasion.

Stressing upon the importance of industry and tourism, he went onto say that while industy would be limited to specified estates mainly in plains, tourism had potential to tap interior regions and generate alternate employment avenues.

He mentioned that in employing Himachali youth sill gap was a major hurdle for industry. A Chetna Career Counseling Centre had been started we are in the in the process of starting a Skill Development Center in association with Indian Institute of Skill Development as a pilot project in Parwanoo, said Sehgal.

Chief Minister Prem Kumar Dhumal, who presided over the session in his address, said that joint committee would be constituted to deal with industry issues.

He added that it was at the recommendation of industry that the poly house scheme was being implemented. Giving details about an apple rejuvenation plan, the chief minister said in the first phase Rs 80 crore had been proposed for improving plantation stocks on 12000 hectares of orchard lands. Emphasis was also being laid upon organic farming and large scale medicinal plant cultivation, he added.

Appreciating the initiatives taken by the government to combat climate change and make the state carbon neutral, Harpal Singh chairman CII northern region said to make progress and without compromising on its social and economic development targets the chamber would focus on greening of industry, CO2 emission quantification, disclosure and policy roadmap.

Singh pointed out concern for better road and rail connectivity. At the same time he mentioned that better broadband connectivity was required as it would prove of vital importance and the government needed to view it in all earnest.

Chief secretary Asha Swaroop let the session know that an MoU had been signed with Petroleum and Natural Gas Regulatory Board for supply of gas as an alternate source of fuel for the state.