New Delhi: Spiritual leader Swami Pratibhanand, a suspect in the murder of BSP leader and realtor Deepak Bhardwaj in Delhi, is changing hideouts to avoid arrest, police Monday said, adding that plots to kill the politician were also made in January and March.

A Delhi Police officer said that Pratibhanand, 48, has changed his hideouts in at least seven cities of separate states since March 26 murder of Bhardwaj at his farmhouse in south Delhi’s Rajokri. 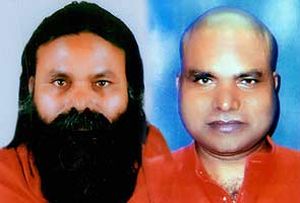 Pratibhanand, a resident of Beed district in Maharashtra, is suspected to have travelled to locations in Nanded in Maharashtra, Mathura in Uttar Pradesh, Haridwar in Uttrakhand, Indore in Madhya Pradesh, Bangalore in Karnataka, Patna in Bihar, and Kolkata in West Bengal since the murder.

The Officer said two days ago he was seen at Bihar’s Patna city, with changed physical appearances.

The swami, who usually wore saffron clothes, was sporting a shirt and a pair of trousers.

“Pratibhanand had spent one day in Patna. But he again gave a slip to a police team which tried to catch him,” said the officer.

Police have released the sketch of Pratibhanand and questioned over 20 people at Jhajjar in Haryana, where he was living before becoming untraceable.

“Bhardwaj’s murder contract deal was finalised for over Rs.3 crore. Pratibhanand was supposed to get Rs.2 crore from the main conspirator while the remaining amount was promised to be provided to the shooters and other middlemen,” said the officer.

“Pratibhanand wanted to buy an ashram or land for which he needed money. In the meantime, he came in contact with the main conspirator who offered him the deal for the contract killing,” said the officer.

For past 18 months, he was looking for land in Haridawar, Karnal in Haryana and Solan in Himachal Pradesh. He also went to the Kumbh Mela in Allahabad in Uttar Pradesh and met several priests regarding this, added the officer.

Before Bhardwaj’s contract killing, several rounds of meetings took place between the main conspirator and the swami, said the officer.

The officer said that the accused did not want to kill Bhardwaj at his farmhouse.

“Two more earlier attempts were made in January and March to kill Bhardwaj,” said the officer.

“Family members of the victim are still under suspicion and their role cannot be ruled out,” added the officer.

Bharadwaj, was gunned down by two hired killers Sunil Mann alias Sonu and Purushottam Rana alias Monu, at his 35-acre farmhouse in south Delhi. They have been arrested.

Police also arrested Rakesh alias Bhola, the owner of the car used by the killers after the murder, and Rakesh Malik, a commercial pilot who allegedly hired the shooters.