Chandigarh, Feb 8 (IANS) Pushed to the wall with the conviction and arrest of its two top leaders in a teachers’ recruitment scandal last month, Haryana’s opposition Indian National Lok Dal (INLD) has taken the attack into the camp of the ruling Congress and blamed it for the mess. 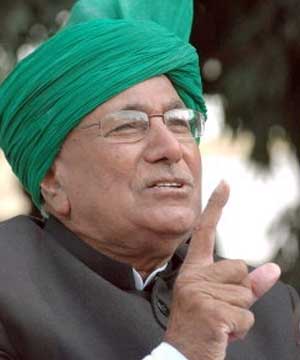 The ruling Congress is hitting back saying that the INLD and Chautalas had only themselves to blame.

INLD president and former chief minister Om Prakash Chautala and his son and party secretary general Ajay Chautala were sentenced to 10 years’ imprisonment by a court in Delhi last month on charges of bribery and irregularities in the recruitment of over 3,200 junior basic trained (JBT) teachers. Fifty-three others, including a legislator, two IAS officers and some other officers, were also sentenced by the Central Bureau of Investigation court.

Left alone after his father and elder brother were sent to prison, INLD leader Abhay Chautala is holding rallies in the state to ensure that the party does not go out of political sight following the arrest of its top leaders.

Abhay has been blaming the Congress leadership, especially Chief Minister Bhupinder Singh Hooda, for “fixing” the INLD leaders in the scam.

“If giving jobs to youth is a crime then we are ready to go to jail many times. The Congress has used the CBI to fix us,” Abhay Chautala has been telling people at the rallies.

The INLD onslaught has put the Congress camp on the defensive.

Ministers, legislators and other Congress leaders are trying to explain that the Hooda government was not responsible for Chautalas being convicted and sent to jail.

Hooda’s aide K.V Singh suggested that the INLD “honour the decision of the CBI court and proceed legally in the case”.

“They should not try to mislead the people by making it a political issue,” he said.

“The way INLD leaders were targeting the Congress in this case was completely baseless and condemnable. On the complaint of an IAS officer, the CBI had started investigation in the case on the direction of the Supreme Court in 2003. Mr Om Prakash Chautala was the chief minister of Haryana and the NDA was in power in the centre, of which the INLD was a part,” said Singh, officer on special duty, media.

When the case was registered in 2004, he said, the INLD was still in power in Haryana and the National Democratic Alliance in New Delhi.

“Therefore, it is completely wrong to target the Congress in this case. The INLD leaders are trying to defame the Congress and misguiding people,” he added.

Congress legislator Sampat Singh, who used to be finance minister in Chautala’s government earlier, too defended the Congress party on the JBT scam issue.

“The Congress took its time to respond to the (CBI court) verdict as it wanted to see how the INLD reacted to it. Since the INLD is blaming the Congress, our party will counter it,” Sampat Singh said here.

Hooda, at a meeting here this week, directed ministers, legislators and other leaders to counter the INLD propaganda against the Congress.