New Delhi (IANS) Bollywood is a key platform but disc jockeying is still a nascent field in India with many DJs depending on weddings to bring in the money, says celebrity DJ Khushi who believes the time has come for media and music labels to support his tribe with the “right infrastructure and vision”. 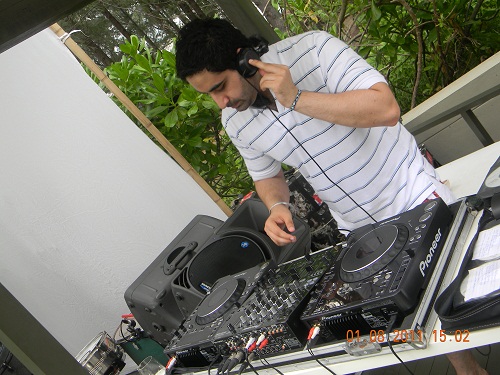 Khushi, who has been active in the music world for nine years and who won the best DJ title in the Entertainers Connect Live Quotient Awards 2012, got his first “big” break with the remixed “Chammak challo” for superstar Shah Rukh Khan’s 2011 “Ra.One”. It was a “life changer”, he admits.

“Bollywood is very important. It is the only platform in today’s time to showcase your talent (widely). Albums don’t work any more; the concept of singles has still not started in India yet, and DJs still don’t get the support from media or music labels like they get internationally,” Khushi told .

While Bollywood is a wonderful medium to draw attention, “there is still a very long way to go for the DJing industry in India”.

“We have a lot of talent here, but just don’t have the right infrastructure, vision and support system for DJs,” added the 28-year-old.

The job of a DJ is often compared to a storyteller, said Khushi. Explaining what it entails, he said a DJ console usually consists of CD players and mixers. While you are listening and grooving to a song, the DJ starts mixing the next song making sure that the musical notes of each preceding track complements the previous one.

Traditionally, a DJ plays popular songs at nightclubs, parties and events. Internationally, they play at large concerts too, sometimes adding their own sounds to original music.

However, for the layperson here, the term ‘DJ’ simply implies the person who gets the wedding or nightclub parties kicking. But that business itself has witnessed exponential growth – with DJs making anything between Rs.25,000 to Rs.500,000 per night.

“Weddings is a huge chunk of business that I do and most DJs do. The entire perception of DJing at a wedding has changed drastically now as the weddings are becoming bigger and better.

“People are willing to shell out money for DJs as they now understand that the DJ is the master of their party. He can either make it or break it,” added Khushi, who has played in places like Croatia, Saint Tropez, Dubai, Bangkok, Pattaya, Phuket, Hong Kong, Macau and Bahrain.

“I was in Europe, travelling and playing last year and, at some places, I did hear songs like ‘Jai ho’, ‘Tu mera hero’ and ‘Chammak challo’. Some songs are loved by people even if they don’t understand the words.

“That is a great start and let us hope we continue making such great music, which will increase the awareness and love for Bollywood music all over the world,” said the DJ, who is also behind remixes of hit numbers like “Desi boys”, “Chikni chameli”, “Anarkali disco chali” and “Vele”.

He had even created the official remix of Oscar-winning composer A.R. Rahman’s track “Hosanna”, and is also behind the popular remix of the “Matru ki bijlee ka mandola” number.

On his part, Khushi hopes the presence of Bollywood music will widen globally.

“Bollywood music is already global but, yes, there is still a long way to go. It is good that a lot of international artists are now looking at India as a talent hub. I would like to collaborate with such artists and create music, which has an essence of Indian music in it may be,” said Khushi.

He is already trying to focus on “international dance music”.

“I have just signed a track with Stoney Boy Records, a sub-label of Armada Music owned by popular DJ Armin Van Burren. I’ll now concentrate a lot on producing international music too and doing tie-ups with a lot of international artists,” said the New Delhi-based DJ, who has recently completed a track with Israeli artists Flash Brothers.