Bangalore/New Delhi: Former Karnataka BJP leader B.S. Yeddyurappa Monday changed his tune on toppling the Jagadish Shettar ministry, amid speculation that some BJP lawmakers were now hesitant to quit the assembly and party after having announced last week they would do so. 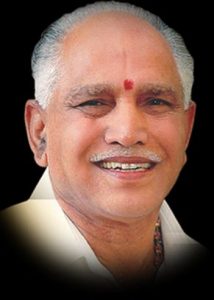 “Our intention is not to topple the (Shettar) government nor oppose budget presentation (by Shettar),” the former chief minister told reporters here, five days after 13 ruling party assembly members supporting him said they would quit the assembly.

Yeddyurappa said that if he wanted to oppose budget presentation, “I would have got 20 MLAs (members of legislative assembly) to resign. I don’t have such plans”.

This statement goes against his stand all these days that he would not allow Shettar to present the budget for the year 2013-14 on Feb 8 on the ground that the chief minister has lost majority.

The BJP has 118 members including the speaker in the 225-member assembly in which two seats are vacant.

After the meeting, both told reporters that there “is no crisis” for the ruling party in Karnataka.

Gopalakrishna told reporters that he and Nagaraju had submitted documentary evidence to the speaker “on the anti-party activities of the 12 MLAs in the last two to three months and sought their disqualification”.

The 12 are among the 13 legislators who last Wednesday went to Bopaiah to submit their resignation from the assembly.

But since Bopaiah was not present, they met Governor H.R. Bhardwaj and complained to him that the speaker was absent in spite of being informed Tuesday about their intention to submit their resignations the next day. They also gave copies of the resignation letters to the governor.

Among the 13 are C.M. Udasi and Shobha Karandlaje who Wednesday quit the Shettar ministry. Udasi was handling public works department and Karandlaje held energy portfolio.

Udasi told reporters Monday in Bangalore that Bopaiah had given appointment for Tuesday and the 13 legislators would submit the resignation letters to him.

However, there is speculation that two or three of them were now hesitant to do so and are said to have told the state BJP leadership that they were “under pressure” to quit.

Apart from the reported reluctance of some of the legislators backing him to go ahead with resignations, several other factors seem to be influencing Yeddyurappa to change his tune.

Shettar is playing the same card that Yeddyurappa did several times when he was chief minister in 2008-11 and faced rebellion – marshal the support of religious leaders.

On Sunday, around 60 pontiffs belonging to various castes, including the powerful Lingayat community, met Shettar in Bangalore and “blessed” him to present the budget and complete the full term which ends in May.

Both Shettar and Yeddyurappa belong to the Lingayat caste which accounts for 17 percent of the state’s 65 million population.

Shettar is also playing the region-card against Yeddyurappa.

“People of north Karnataka will not forgive those who bring down a government headed by a leader from the region and preventing him from presenting the budget,” Shettar had warned last week in his hometown Hubli, about 400 km from Bangalore.

The 10-day budget session of the legislature is scheduled to begin here Feb 4.

For the Shettar ministry to be reduced to minority, more than 20 BJP legislators would have to quit the assembly.

The effective strength of the 225-member house is 223 as two seats are vacant. BJP has 118 members, including the speaker. It has the support of one of the seven Independent members who is a cabinet minister.

The Congress has 71 members and the Janata Dal-Secular 26. One is a nominated member.