Srinagar (IANS) The Kashmir Valley and the Ladakh region of the state continued to be in the grip of bone-chilling temperatures Friday and adding to the overall misery the weather office forecast rain/snow during the next 48 hours. 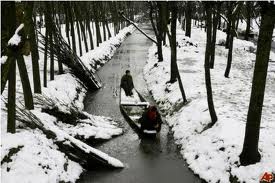 Kargil town, at minus 18.6 degrees Celsius, recorded the lowest temperature in the state.

Lotus said: “A Western Disturbance (WD) is approaching Jammu and Kashmir under whose influence we are expecting moderate snowfall in the higher reaches and rain/snow in the plains during the next 48 hours.”

‘Western disturbances’ are extra tropical storms in the Mediterranean Sea which result in sudden rain and snow in India, Pakistan, Nepal and Bangladesh. These meteorological disturbances plays an important role in the growth of rabi or winter crops in these countries.

Kashmir is currently reeling under the 40-day long harsh winter period known locally as ‘Chillai Kalan’, which started Dec 21 and will end Jan 30.

In the Jammu region, the harsh winter period is believed to end Jan 12. The locals there celebrate the improvement in the season by lighting bonfires, also known as the ‘Lohri’ festival as elsewhere in northern India.