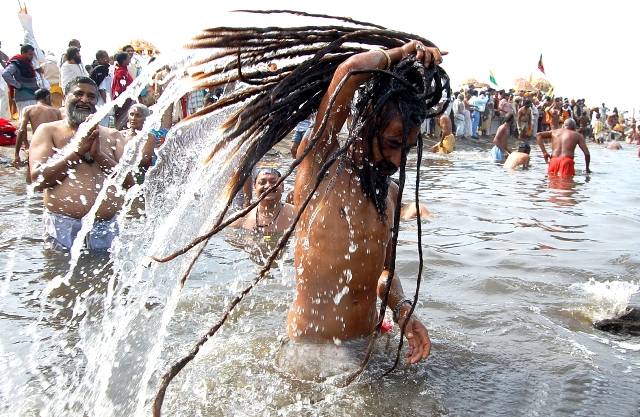 Allahabad: For reasons other than preaching salvation and guiding the teeming millions on faith and spirituality, the saffron-robed seers camping in the sprawling Kumbh mela premises are making waves for many other reasons too. Some are attracting eyeballs for their fondness for computers, IT accessories, pets, gold jewellery and even fleets of luxury cars!

And they are loving every moment of being called ‘Computer baba’, ‘Gold baba’, ‘Tablet-waale baba’, ‘Ek haath baba’ and the like. There is even a ‘Kutte-waale baba’. The sobriquets are given to them by their followers for one personal streak or the other.

A five-foot something, with a twirled moustache and a pot belly would pass off as any other sadhu among the hundreds camping here since Jan 14 when the 55-day-long religious congregation – arguably the largest in the world and expected to draw over 10 million people – started but for his glistening gold jewellery. Sudhir Kumar aka Bittu-ji Maharaj claims to be wearing gold ornaments worth over millions of rupees. Dangling around his neck are heavy gold chains with lockets of Shirdi Sai Baba, Shiva, Durga and other Hindu gods. A resident of Gandhi Nagar in New Delhi, he says he has been wearing the “gold stuff” since very early in his life.

Admitting his fancy for the yellow metal, Bittu Maharaj said as of now, he is wearing more than four kg of gold on his body. He also points to the security guards who are with him 24×7 at the Harihar Ashram

“It is a dangerous world and you’ve got to be safe,” the 45-year-old chuckled. While he says he is not a ‘sanyasi’ (renunciate) in the literal sense of the word as he runs a readymade garment shop in the national capital he prefers calling himself “one of the many in the saffron league.”

Wearing a diamond-studded gold watch he said he was alsogifted a Shri Yantra by Yoga guru Baba Ramdev. He has four cars, including a Mercedes Benz.

Also drawing large crowds is Computer Baba or Swami Namdev Tyagi, representing the Digamber Akhada of Indore. He claims to have a “computer-like brain and sharp memory” and hence the name.

Armed with all latest gadgetry, including a laptop, wi-fi dongles and a chopper, he has put the Mela administration in a quandary with his demand of being allowed to take the ‘Shahi Snan’ scheduled for Sunday from a chopper.

He had missed the inaugural Shahi Snan on Makar Sankranti and now wants to jump into the holy Ganges from the helicopter. While the administration has outrightly denied him permission to do so, he says he wanted to do it to avoid large crowds.

“When sanyasis come atop horses and elephants for the Shahi Snan why can’t I bring my vehicle, which is a helicopter by chance,” he asked while speaking to IANS. The chopper, he says was no “big deal” as his devotees have also arranged for it in the past.

Avadhesh Giri would be any other average sadhu but for his glitzy, vintage Ambassador car painted in bright orange. The car, named after Bollywood flick “Tarzan The Wonder Car”, has led to Giri being called Tarzan Baba.

His disciples miss no opportunity to tell the devotees flocking to him about the “Tarzan like powers of Baba and the car.”

Other sadhu’s attracting attention are the one’s wielding the latest weaponry including pistols, revolvers and other guns. This, they say, is very much part of their Naga sect, which was initially believed to be an army created by a Shankracharya for “protection and preservation of the Hindu religion.”

Then, there are some pet lovers like Mahant Prithvigiri who loves walking around with a black Labrador he has named after the boxing legend Mike Tyson.

He said passionately that Tyson was a seer in his previous birth, is a vegetarian and is now a ‘darvesh’ (holy messenger). “He is one of us and hence we don’t use words like dog or animal for him”, Prithvigiri warned while speaking to IANS.

A local seer, Anand Giri of the Bagambari Peeth, boasts of a vast following on the internet and exhibits his tablet to his devotees. He takes time, between rituals, to showcase his fan following on social networks too.

Naga Kailsash Giri of the fabled Niranjani Akhada has been standing on one foot for almost three decades now. “This is for world peace,” he muses.

His other leg has shriveled to about two feet from the hip due to lack of use.