Hyderabad: Protests were held across Telangana Thursday over Congress leader Ghulam Nabi Azad’s statement that a decision on the Telangana issue is not likely by Jan 28. 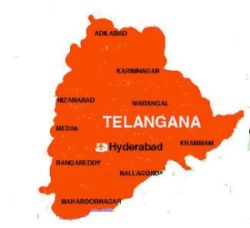 Educational institutions in the districts were closed on a call given by Osmania University students’ Joint Action Committee.

Activists of various groups demanding statehood to Telangana took to the streets, demanding that the central government stand by its word and announce a decision by Jan 28.

Protestors attacked the office of the Congress party in Warangal town. They set afire an effigy of Azad and also demanded resignation of all the ministers from the region.

The protestors alleged that the pressure by leaders from Seemandhra (Rayalaseema and Andhra regions) forced the central government to defer the announcement.

Students of Osmania University in Hyderabad staged protests to condemn Azad’s statement. They alleged that the Congress government had once again betrayed the people. The protestors set afire the Congress party flag and Azad’s effigy at Arts College on the campus.

The students also tried to lay siege to the house of Rajya Sabha member and Congress leader K.V.P. Ramachandra Rao.

Rallies were also taken out in Seemandhra by students and activists of various parties, opposing the proposed bifurcation of Andhra Pradesh. A huge rally was organized in Vijayawada to demand that the state be kept united.