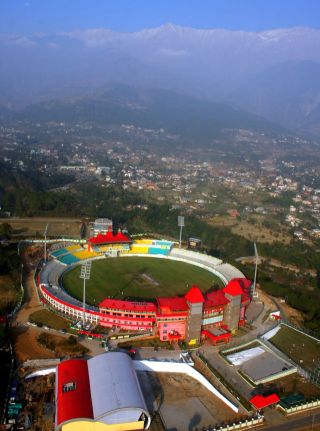 Dharamshala: With a backdrop of snow clad majestic Dhauladhar mountain ranges for a game of competitive cricket, the first one day international to be hosted at what  is one of the most scenic grounds in the world is all set to have the Indian and England teams give their best for the game.

“It is going to be a big day for us,” says Anurag Thakur, president of Himachal Pradesh Cricket Association (HPCA) who has been instrumental in setting up the ground.

Meteorological office has forecast a sunny day for Sunday January 27, the day the match is scheduled.

Having qualified to host a one-day international, the next step would be to hold a test match at this ground,” said Thakur.

To save the players and spectators from the night time chill that descends on the Dharamshala stadium in January, the game would be a day match that would start at 9 a.m., say the organizers. Tickets for the game are a sellout.

The Dharamshala India-England match being the last of the current series, the prize distribution ceremony is expected to attract all top BCCI officials to the venue.

For hosting summer cricket, when it is very hot in the plains of India, the stadium is equipped to hold a day night match.

An India – Pakistan first class cricket game was played at Dharamshala in the summer of 2005 and over the last two seasons of Indian Premier League (IPL), the ground has served as the second home for Kings XI, a Punjab based franchise.

Experience of playing the IPL games has elevated the stadium for holding of one day international matches at the ground.

At an altitude of 1317 meters, the Dharamshala stadium is the first full-fledged stadium in Himachal Pradesh.

Will Davies for Wall Street Journal has termed it as the World’s Most Picturesque Stadium.